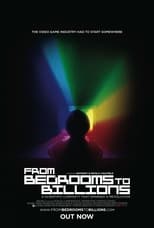 From Bedrooms to Billions

A Scientific Curiosity That Sparked a Revolution

From Bedrooms to Billions is a 2014 documentary film by British filmmakers Anthony Caulfield and Nicola Caulfield that tells the story of the British video games industry from 1979 to the present day. The film focuses on how the creativity and vision of a relatively small number of individuals allowed the UK to play a key, pioneering role in the shaping of the billion dollar video games industry which today dominates the modern worlds entertainment landscape. The film features interviews with major British game designers, journalists and musicians from across the last 30 years. 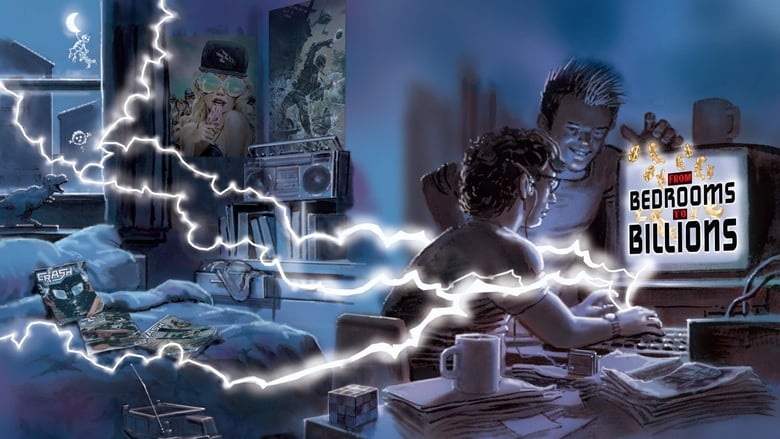 Similar Movies to From Bedrooms to Billions

From executive producer Zach Braff and director Jeremy Snead, "Video Games: The Movie" is an epic feature length documentary chronicling the meteoric rise of video games from nerd niche to multi-billion dollar industry. Narrated by Sean Astin and featuring in-depth interviews with the godfathers who started it all, the icons of game design, and the geek gurus who are leading us into the future, "Video Games: The Movie" is a celebration of gaming from Atari to Xbox and an eye-opening look at what lies ahead.
Movie Star Rating : 5.8  Read More

Based on the global blockbuster videogame franchise from Sega, Sonic the Hedgehog tells the story of the world’s speediest hedgehog as he embraces his new home on Earth. In this live-action adventure comedy, Sonic and his new best friend team up to defend the planet from the evil genius Dr. Robotnik and his plans for world domination.
Movie Star Rating : 7.5  Read More

After the vicious slaughter of his family by stone-cold mercenary Sub-Zero, Hanzo Hasashi is exiled to the torturous Netherrealm. There, in exchange for his servitude to the sinister Quan Chi, he’s given a chance to avenge his family – and is resurrected as Scorpion, a lost soul bent on revenge. Back on Earthrealm, Lord Raiden gathers a team of elite warriors – Shaolin monk Liu Kang, Special Forces officer Sonya Blade and action star Johnny Cage – an unlikely band of heroes with one chance to save humanity. To do this, they must defeat Shang Tsung’s horde of Outworld gladiators and reign over the Mortal Kombat tournament.
Movie Star Rating : 8.4  Read More

The King of Kong: A Fistful of Quarters

In this hilarious arcade showdown, a humble novice goes head-to-head against the reigning Donkey Kong champ in a confrontation that rocks the gaming world to its processors! For over 20 years, Billy Mitchell has owned the throne of the Donkey Kong world. No one could beat his top score until now. Newcomer Steve Wiebe claims to have beaten the unbeatable, but Mitchell isn't ready to relinquish his crown without a fight. Go behind the barrels as the two battle it out in a vicious war to earn the title of the true King of Kong.
Movie Star Rating : 7.9  Read More

Two brothers have half of a powerful ancient Chinese talisman. An evil gang leader has the other half, and determines to get the brothers' half and have a complete medallion so he can gain absolute power.
Movie Star Rating : 4.3  Read More

As Kevin Flynn searches for proof that he invented a hit video game, he is 'digitalized' by a laser and finds himself inside 'The Grid', where programs suffer under the tyrannical rule of the Master Control Program (MCP). With the help of a security program called 'TRON', Flynn seeks to free The Grid from the MCP.
Movie Star Rating : 6.7  Read More

The film revolves around a local street-racer who partners with a rich and arrogant business associate, only to find himself framed by his colleague and sent to prison. After he gets out, he joins a New York-to-Los Angeles race to get revenge. But when the ex-partner learns of the scheme, he puts a massive bounty on the racer's head, forcing him to run a cross-country gauntlet of illegal racers in all manner of supercharged vehicles.
Movie Star Rating : 6.3  Read More

A team of space marines known as the Rapid Response Tactical Squad, led by Sarge, is sent to a science facility on Mars after somebody reports a security breach. There, they learn that the alert came after a test subject, a mass murderer purposefully injected with alien DNA, broke free and began killing people. Dr. Grimm, who is related to team member Reaper, informs them all that the chromosome can mutate humans into monsters - and is highly infectious.
Movie Star Rating : 5  Read More

In the 18th century, a vampire escapes from the freak show she once participated in and teams up with a group of vampire slayers to kill the man who raped her mother. Storyline In the Eighteenth Century, Rayne is the half-human half-vampire Dhampir and the lead attraction in a carnival's freak-show in Romania. When she escapes, she meets a fortuneteller that tells that her mother was raped by the king of the vampires Kagan and she decides to destroy her father. In her journey for revenge, she meets Vladimir and Sebastian, the leaders of the fortress of vampire hunters Brimstone, and she joins their society. She seeks for powerful talismans to defeat Kagan, while the skilled warriors Vladimir and Sebastian train her to face the forces of Kagan and her human side falls in love with Sebastian. Written by Claudio Carvalho, Rio de Janeiro, Brazil
Movie Star Rating : 4  Read More

The magical kingdom of Lucis is home to the world’s last remaining Crystal, and the menacing empire of Niflheim is determined to steal it. King Regis of Lucis commands an elite force of soldiers called the Kingsglaive. Wielding their king’s magic, they fight to protect Lucis. As the overwhelming military might of the empire bears down, King Regis is faced with an impossible ultimatum – to marry his son, Prince Noctis to Princess Lunafreya of Tenebrae, captive of Niflheim, and surrender his lands to Niflheim rule. Although the king concedes, it becomes clear that the empire will stop at nothing to achieve their devious goals, with only the Kingsglaive standing between them and world domination.
Movie Star Rating : 6.8  Read More