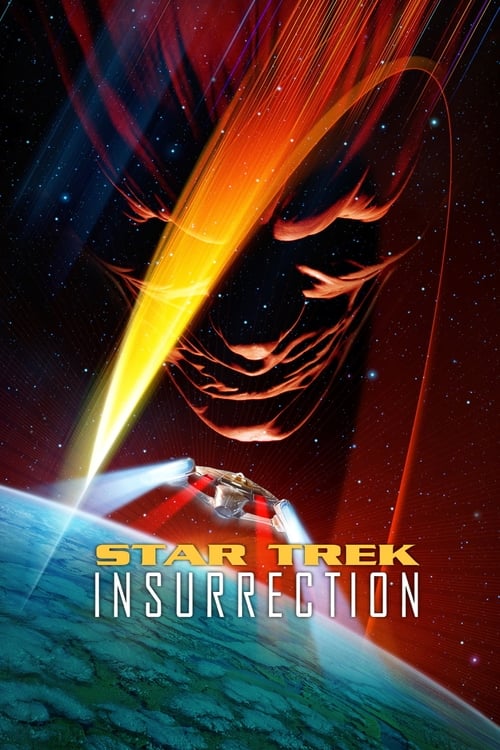 Tagline : The battle for paradise has begun.

Plot : When an alien race and factions within Starfleet attempt to take over a planet that has "regenerative" properties, it falls upon Captain Picard and the crew of the Enterprise to defend the planet's people as well as the very ideals upon which the Federation itself was founded. 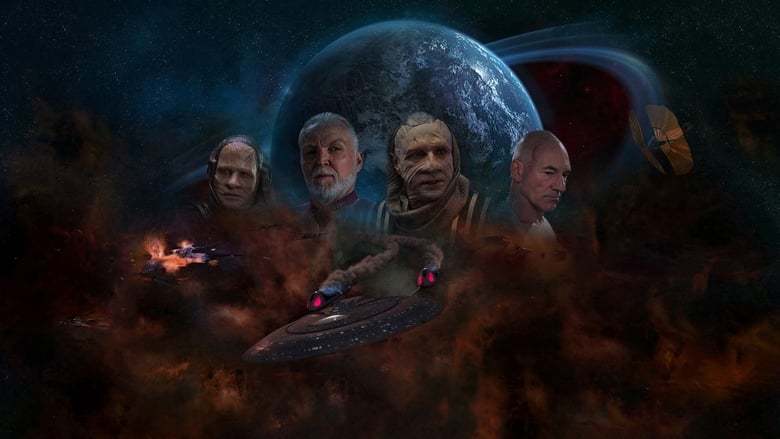 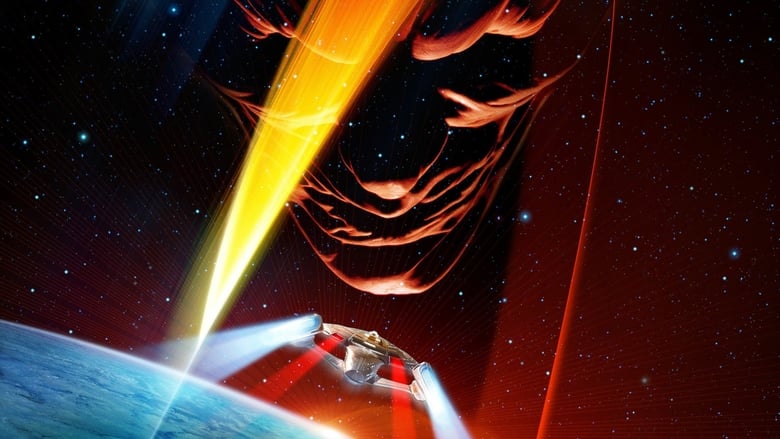 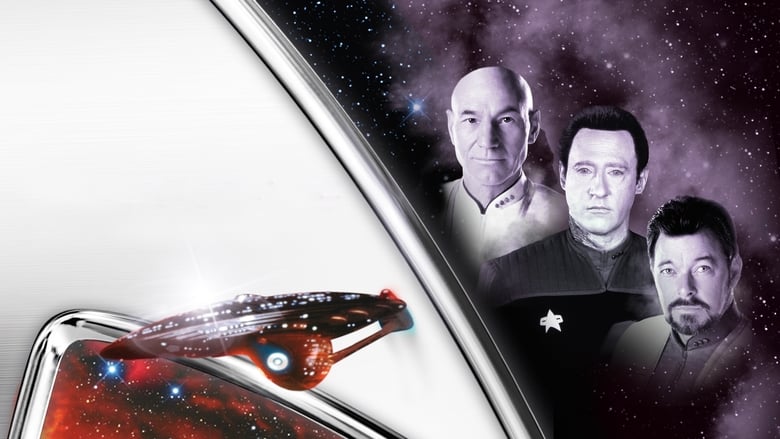 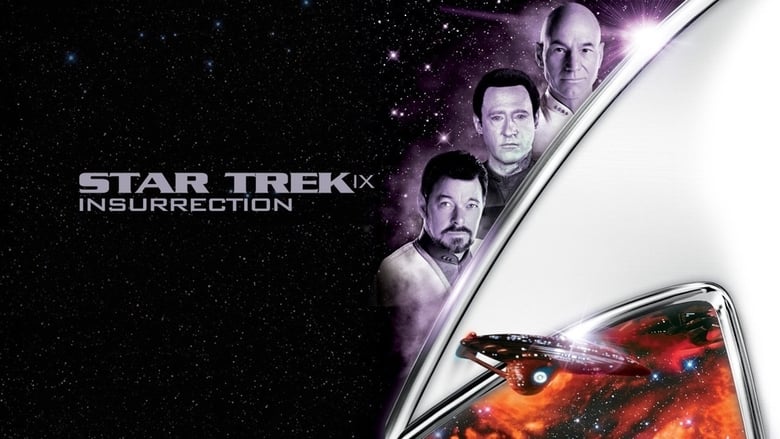 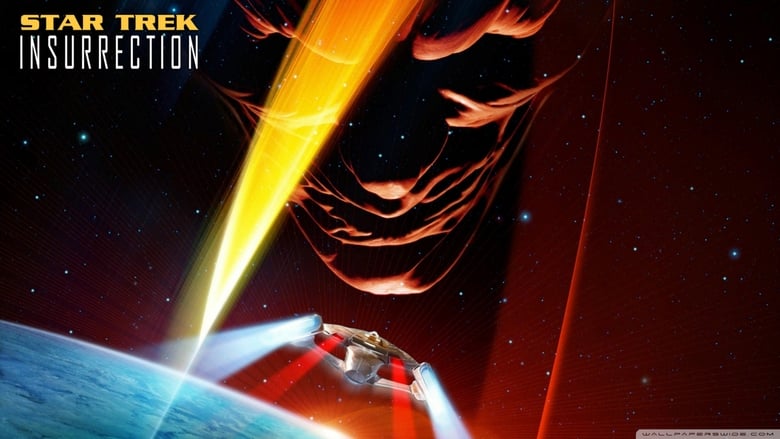 Plot : As Jean Luc Picard attends festivities onboard the Enterprise welcoming a new race to the Federation. He receives an urgent call from Admiral Dougherty about Data, that was sent on an observation mission of the Ba'Ku race. The Federation has installed there a hidden outpost and the So'Na race is there too. Data has gone out of control and reveals the federation outpost to the natives. Picard and his senior officers get on the planet to discuss with them to surrender the Federation personnel. He is welcomed by the (extremely) peaceful Ba'Ku that are represented by Anji and Sojef, that explain the history and philosophy of their people. They have settled on this planet generations ago and have benefited from a local radiation extending their life greatly. Picard is pushed by Dougherty to leave the planet to let the "observation" mission without interference. Picard smells deception and will have to disobey orders to defend one of the Federation's basic principles. I know most people don't like this movie and rank it low among the Star trek movies. Of course there's not much action and fights. The new characters are either very boring or too obviously "evil". But the main point here is to defend the "prime directive" (= not to interfere in the development of a civilization that is inferior in technology. There is not much else here than a deep analysis of what the Federation is and when it must or not intervene. So there's a light love story wit Picard and Anij, Data befriends a kid in his discovery of humanity's young age behavior. After many movies about the Klingons, Romulans ... I found it fresh to have two (?) new races with different histories and ways of life. And having the movie centered on the "prime directive", and how a cunning race can twist it (after all, the Ba'Ku are not really "natives" of the planet and shouldn't be protected by the prime directive), and how one superior officer, if misleaded, can lead to eradication of hundreds of people.

The least of the four Next Generation films, but has its highlights Released in 1998 and directed by Jonathan Frakes, "Star Trek: Insurrection" is the third Star Trek film featuring the Next Generation cast and ninth overall. The plot revolves around a serene alien race, the Ba'ku, whose planet offers regenerative radiation and therefore extremely long lifespans; moreover, they live in harmony with their environment and reject advanced technology. With the aid of an alien race called the Son'a, the Federation secretly (deceptively) researches the Ba'ku culture, but the Son'a intend to take the planet for themselves and others who secretly want to regenerate their bodies (i.e. drink of the 'Fountain of Youth'). The problem is that Captain Picard and the Enterprise-E crew are loyal to the Prime Directive. The plot is good with some interesting ideas, like the paradisal planet where immortality is nigh reality and the innate desire for regeneration and eternal life. I like the new black Federation uniforms and the cast is as likable as ever. Unfortunately, something prevents the movie from soaring. It's decent and sometimes thought-provoking; it's just underwhelming with some bits falling flat. I like it but, for me, it’s the least of the four TNG films. The film runs 103 minutes and was shot in California at Convict Lake, Mammoth Lakes Park; San Gabriel Dam, Angeles National Forest; Lake Sherwood; Bishop; and Paramount Studios, Los Angeles. GRADE: B-

I just never warmed to the "Next Generation" crew and here they did little to improve that feeling. It all begins with the most annoying of them all - the android "Data" (Brent Spiner) going a bit rogue in an ostensibly peaceful, and tech-free, settlement. What's afoot? Well after a space-chase and some Gilbert and Sullivan we discover that the Federation and the smooth-skinned "Son'a" have joined forces to capitalise on some curative radiation that emanates from the planet. Thing is, by harnessing this phenomena they will render the place uninhabitable - so what to do with the locals (all 600 of them)? It seems our singing "Data" has cottoned on to this and it isn't long before "Picard" (Patrick Stewart) and the rest of his charm-free crew are en route to save the day. It picks up slightly for the last twenty minutes which at least gives us some phaser action, but otherwise it's all pretty turgid and dialogue heavy. The Captain manages a little bit of frankly rather cloying love interest with Donna Murphy's "Anij" and there is the obligatory child with his small creature too. F. Murray Abraham and Anthony Zerbe tried their best as the conspiring powers-that-be, but there is simply no jeopardy here at all. Messrs. Shatner et al had charisma - even if their stories were often just as weak, but this shower lack that on-screen presence and the (not so) subliminal pontificating just got on my nerves. At just under 1¾ hours it looks like a two-part episode from the series and no amount of Viagra is going to get this insurrection going, sorry.

When Susan Murphy is unwittingly clobbered by a meteor full of outer space gunk on her wedding day, she mysteriously grows to 49-feet-11-inches. The military jumps into action and captures Susan, secreting her away to a covert government compound. She is renamed Ginormica and placed in confinement with a ragtag group of Monsters...
Movie Star Rating : 6.2  Read More

Thirty years ago, aliens arrive on Earth. Not to conquer or give aid, but to find refuge from their dying planet. Separated from humans in a South African area called District 9, the aliens are managed by Multi-National United, which is unconcerned with the aliens' welfare but will do anything to master their advanced technology. When a company field agent contracts a mysterious virus that begins to alter his DNA, there is only one place he can hide: District 9.
Movie Star Rating : 7.4  Read More

Invasion of the Body Snatchers

Matthew Bennell notices that several of his friends are complaining that their close relatives are in some way different. When questioned later they themselves seem changed, as they deny everything or make lame excuses. As the invaders increase in number they become more open and Bennell, who has by now witnessed an attempted 'replacement', realises that he and his friends must escape or suffer the same fate.
Movie Star Rating : 7.2  Read More

Futurama: The Beast with a Billion Backs

Fresh off ripping space-time a new one at the end of "Bender's Big Score," the Planet Express crew is back to mend the tear in reality, or (hopefully) at least not make it worse. Beyond the tear, though, lurks a being of inconceivable...tentacularity. What will become of Earth, and indeed, our universe, when faced with the Beast with a Billion Backs?
Movie Star Rating : 7  Read More

A scientist, Dr Holander, takes his niece Miranda to Mexico in an attempt to reverse the effects of the alien DNA he used to create her. However the treatment goes horribly wrong, and sets Miranda on a killing spree as she sets out to find a mate.
Movie Star Rating : 4.7  Read More

A taxi driver gets more than he bargained for when he picks up two teen runaways. Not only does the pair possess supernatural powers, but they're also trying desperately to escape people who have made them their targets.
Movie Star Rating : 5.8  Read More

When a nuclear missile was fired at Washington in 1945, Captain America managed to detonate it in the upper atmosphere. But then he fell miles into the icy depths of the North Atlantic, where he remained lost for over sixty years. But now, with the world facing the very same evil, Captain America must rise again as our last hope for survival.
Movie Star Rating : 6.8  Read More