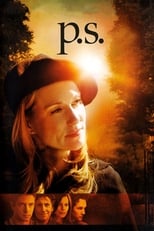 What would you do for a second chance?

Thirty-nine-year old divorcé Louise Harrington (Linney) works in the admissions office at Columbia University School of the Arts. She is unnerved when she receives an application from F. Scott Feinstadt, the same name of her high school sweetheart who was killed in a car crash, and calls the student to arrange an interview. His appearance, mannerisms, and painting style closely resemble those of her former love, and she begins to suspect the young artist may be the reincarnation of her old flame. Hours after meeting, the two embark upon an affair. Also complicating Louises life are her relationship with her ex-husband Peter , who confesses he is learning to cope with a sex addiction that, unknown to her, plagued their marriage; her neer-do-well brother Sammy, who is favored by their mother Ellie despite his shortcomings; and her best friend Missy, who stole the original Scott from Louise before his death and seems intent on doing the same with the contemporary version.

A young couple living in a Connecticut suburb during the mid-1950s struggle to come to terms with their personal problems while trying to raise their two children. Based on a novel by Richard Yates.
Movie Star Rating : 6.9  Read More

While visiting her sister in Paris, a young woman finds romance and learns her brother-in-law is a philanderer.
Movie Star Rating : 5  Read More

Notes on a Scandal

A veteran high school teacher befriends a younger art teacher, who is having an affair with one of her 15-year-old students. However, her intentions with this new "friend" also go well beyond platonic friendship.
Movie Star Rating : 7.1  Read More

Longtime friends Ronny and Nick are partners in an auto-design firm. They are hard at work on a presentation for a dream project that would really launch their company. Then Ronny spots Nick's wife out with another man, and in the process of investigating the possible affair, he learns that Nick has a few secrets of his own. As the presentation nears, Ronny agonizes over what might happen if the truth gets out.
Movie Star Rating : 5.3  Read More

When Gerda Wegener asks her husband Einar to fill in as a portrait model, Einar discovers the person she's meant to be and begins living her life as Lili Elbe. Having realized her true self and with Gerda's love and support, Lili embarks on a groundbreaking journey as a transgender pioneer.
Movie Star Rating : 7.6  Read More

A landscape gardener is hired by famous architect Le Nôtre to construct the grand gardens at the palace of Versailles. As the two work on the palace, they find themselves drawn to each other and are thrown into rivalries within the court of King Louis XIV.
Movie Star Rating : 6.3  Read More

Modern Stone Age family the Flintstones hit the big screen in this live-action version of the classic cartoon. Fred helps Barney adopt a child. Barney sees an opportunity to repay him when Slate Mining tests its employees to find a new executive. But no good deed goes unpunished.
Movie Star Rating : 5.2  Read More

Annie's life is a mess. But when she finds out her lifetime best friend is engaged, she simply must serve as Lillian's maid of honor. Though lovelorn and broke, Annie bluffs her way through the expensive and bizarre rituals. With one chance to get it perfect, she’ll show Lillian and her bridesmaids just how far you’ll go for someone you love.
Movie Star Rating : 6.5  Read More

After a long voyage from Scotland, pianist Ada McGrath and her young daughter, Flora, are left with all their belongings, including a piano, on a New Zealand beach. Ada, who has been mute since childhood, has been sold into marriage to a local man named Alisdair Stewart. Making little attempt to warm up to Alisdair, Ada soon becomes intrigued by his Maori-friendly acquaintance, George Baines, leading to tense, life-altering conflicts.
Movie Star Rating : 7.4  Read More

Three stories happening in New York. The first, by Scorsese, is about a painter who creates his works helped by high volume music and an attractive assistant; second, by Coppola, is about a rich and bold 12 years old who helps her separated parents to reconciliate; third, by Allen, is a witty piece of comedy about the impossibility of getting rid of the son's role.
Movie Star Rating : 6.4  Read More