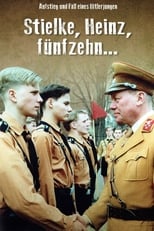 Everything changes for fifteen-year-old Heinz Stielke, a fanatical member of the Hitler Youth, when he learns that his father, who died as a war hero, was actually Jewish. Heinz is forced to leave school, loses his friends, and worst of all, his mother dies in a bombing raid. A kind-hearted police officer tries to get him a place at an orphanage in Thuringia, but on the way there, he is picked up by the SS and sent to a training camp.

Norway, 1942, during World War II. After being separated from her family, Esther, a young Jewish girl from Trondheim, arrives at an isolated farm where she must assume a new identity in order to survive the Nazi persecution.
Movie Star Rating : 5.4  Read More

The Eagle Has Landed

When the Nazi high command learns in late 1943 that Winston Churchill will be spending time at a country estate in Norfolk, it hatches an audacious scheme to kidnap the prime minister and spirit him to Germany for enforced negotiations with Hitler.
Movie Star Rating : 6.5  Read More

Betrayed by an informant, Philippe Gerbier finds himself trapped in a torturous Nazi prison camp. Though Gerbier escapes to rejoin the Resistance in occupied Marseilles, France, and exacts his revenge on the informant, he must continue a quiet, seemingly endless battle against the Nazis in an atmosphere of tension, paranoia and distrust.
Movie Star Rating : 8.1  Read More

Stingo, a young writer, moves to Brooklyn in 1947 to begin work on his first novel. As he becomes friendly with Sophie and her lover Nathan, he learns that she is a Holocaust survivor. Flashbacks reveal her harrowing story, from pre-war prosperity to Auschwitz. In the present, Sophie and Nathan's relationship increasingly unravels as Stingo grows closer to Sophie and Nathan's fragile mental state becomes ever more apparent.
Movie Star Rating : 7.4  Read More

City of Warsaw, Poland, August 1st, 1944. Citizens have experienced inhuman acts of terror and violence during five long years of Nazi occupation. As the Soviet Army relentlessly approaches, the youngest and bravest among them rise up as one and face tyranny fighting street by street, but the price to pay will be high and hard the way to freedom…
Movie Star Rating : 6.8  Read More

The story of a group of men, an Army Rifle company called C-for-Charlie, who change, suffer, and ultimately make essential discoveries about themselves during the fierce World War II battle of Guadalcanal. It follows their journey, from the surprise of an unopposed landing, through the bloody and exhausting battles that follow, to the ultimate departure of those who survived.
Movie Star Rating : 7.4  Read More