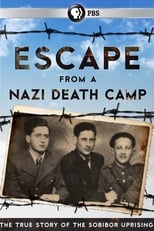 Escape From a Nazi Death Camp

From PBS - The secret Nazi death camp at Sobibor was created solely for the mass extermination of Jews. But on the 14th of October 1943, the inmates fought back, in the biggest and most successful prison outbreak of the Second World War. Told through the firsthand accounts of four survivors--Toivi Blatt, Phillip Bialowitz, Selma Engel-Wijnberg, and former Russian POW Semjon Rozenfeld--and using dramatic reenactments, Escape From a Nazi Death Camp recounts the true horror of life at Sobibor, and the desperation, determination, and courage of its prisoners. Of the 600 inmates present on the day of the escape, 300 escaped into the forest surrounding Sobibor. Of that 300, many were shot, turned in, murdered, or captured by Nazis. Around 50 survived the war and of that 50, only a handful are still alive. Now in their 80s and 90s, this is their last chance to reveal, in their own words, the true story of the day they escaped certain death to freedom.

Similar Movies to Escape From a Nazi Death Camp

The film "Amen." examines the links between the Vatican and Nazi Germany. The central character is Kurt Gerstein, a member of the Institute for Hygiene of the Waffen-SS who is horrified by what he sees in the death camps. Moreover, he is shocked to learn that the process he used to purify water for his troops, by using zyklon, served as a basis to kill people in gas chambers.
Movie Star Rating : 7.1  Read More

The account of keepers of the Warsaw Zoo, Jan and Antonina Zabinski, who helped save hundreds of people and animals during the Nazi invasion.
Movie Star Rating : 7.2  Read More

Von Ryan's Express stars Frank Sinatra as a POW colonel who leads a daring escape from Nazi Germany by taking over a freight train, but he has to win over the British soldiers he finds himself commanding.
Movie Star Rating : 7  Read More

Max Manus is a Norwegian 2008 biographic war film based on the real events of the life of resistance fighter Max Manus (1914–96), after his contribution in the Winter War against the Soviet Union. The story follows Manus through the outbreak of World War II in Norway until peacetime in 1945.
Movie Star Rating : 6.9  Read More

In 1947, four German judges who served on the bench during the Nazi regime face a military tribunal to answer charges of crimes against humanity. Chief Justice Haywood hears evidence and testimony not only from lead defendant Ernst Janning and his defense attorney Hans Rolfe, but also from the widow of a Nazi general, an idealistic U.S. Army captain and reluctant witness Irene Wallner.
Movie Star Rating : 7.8  Read More