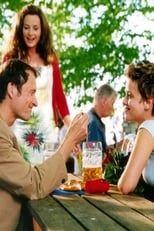 The firefighter Erik wants to make a proposal to his girlfriend Sofie, but at the crucial moment sparkles the attractive Melissa in between. When Sofie learns that Erik had a fleeting affair with Melissa on Carnival, a world collapses for her. But the two gather again, as Erik promises high and holy that such a thing will never happen again. To underline the seriousness of his intentions, he makes her an unconventional offer: he "gives" her an infidelity. He should not have done that, because suddenly he threatens to lose Sofie to his best friend.