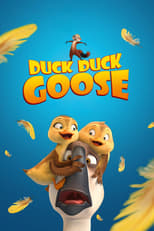 Peng is a freewheeling bachelor goose whod rather do anything than practice for the upcoming migration. He thinks hes better than everyone else and spends his time attempting crazy stunts at even crazier speeds. In one such stunt, Peng flies too near the ground, hits a flock of ducklings and separates brother and sister, Chao and Chi, from the rest. In this unlikely meeting, Peng will begin a journey that will break his wing and nearly break his heart as he grows to understand the power of unconditional love in the form of two ducklings, who likewise grow to see him as the best father they could ever have.

Looney Tunes: Back in Action

Bugs Bunny and Daffy Duck are up to their feuding ways again. Tired of playing second fiddle to Bugs, Daffy has decided to leave the Studio for good. He is aided by Warner Bros.' humor impaired Vice President of Comedy, Kate Houghton, who releases him from his contract and instructs WB security guard/aspiring stunt man DJ Drake to capture and "escort" Daffy off the studio lot.
Movie Star Rating : 5.7  Read More

The Big Bad Fox and Other Tales

The Big Bad Fox recounts the misadventures of a young clumsy Fox and a feisty little red Hen. The Fox, both a little stupid and naïve, tries daily to devour the little Hen, without success. Tired of the repeated humiliation, the Fox is persuaded to steal the Hen’s eggs to raise and then eat. This plan seems perfect, until the moment the chicks hatch…
Movie Star Rating : 7.9  Read More

Daffy Duck and Speedy Gonzales find a treasure map that leads them to a wishing well, which for a penny will grant any wish (through old cartoon footage). Daffy sets up a resort around the well and various Looney Tunes characters have their dreams come true. Meanwhile, Yosemite Sam and the Tasmanian Devil hunt for the varmints who stole their treasure map!
Movie Star Rating : 6.3  Read More

Peter and the Wolf

Disney's animated adaptation of Prokofiev's masterpiece, in which every character is represented musically by a different instrument. Young Peter decides to go hunting for the wolf that's been prowling around the village. Along the way, he is joined by his friends the bird, the duck and the cat. All the fun comes to end, however, when the wolf makes an appearance. Will Peter and his friends live to tell of their adventures?
Movie Star Rating : 6.8  Read More

Babe is a little pig who doesn't quite know his place in the world. With a bunch of odd friends, like Ferdinand the duck who thinks he is a rooster and Fly the dog he calls mom, Babe realizes that he has the makings to become the greatest sheep pig of all time, and Farmer Hogget knows it. With the help of the sheep dogs Babe learns that a pig can be anything that he wants to be.
Movie Star Rating : 6  Read More

A scientific experiment unknowingly brings extraterrestrial life forms to the Earth through a laser beam. First is the cigar smoking drake Howard from the duck's planet. A few kids try to keep him from the greedy scientists and help him back to his planet. But then a much less friendly being arrives through the beam...
Movie Star Rating : 5.1  Read More

It's snowed, and Donald Duck is going sledding. Meanwhile, his nephews have built a snowman at the bottom of the hill. Donald aims his sled at their snowman and demolishes it, so the boys get even by including a boulder in the bottom of their next snowman. This means war, so they retreat to opposing snow forts for battle.
Movie Star Rating : 6.4  Read More

Lane Meyer is obsessed with his girlfriend Beth and is crushed when she falls for the new captain of the ski team, Roy. After several failed suicide attempts, narrow escapes from the relentless paper boy, and nearly unbearable dinners at home with his crazy family, Lane finds a new love in French exchange student Monique Junot. Meanwhile, he must beat Roy on the slopes to regain his honor.
Movie Star Rating : 6.8  Read More

Queer Duck: The Movie is the relentlessly funny, feature-length extension of the animated series Queer Duck, created by frequent The Simpsons scripter Mike Reiss. Sexually scandalous yet sweet, the movie is a cascade of pop-culture stereotypes of gays in America, punctuated by rapid-fire references (as with The Simpsons) to, well, just about everything: classic movies, game shows, Gilbert and Sullivan, Paul Lynde. Hey, there's even a storyline: Queer Duck (voiced by Jim J. Bullock) and his partner of 18 months ("That's a lifetime in gay years"), Harvey Fierstein sound-alike Stephen Arlo "Openly" Gator (Kevin Michael Richardson), hit a relationship crisis when the fey fowl is wooed by a brassy Broadway broad. Queer Duck wonders if he'd be happier being straight. While Gator the waiter spills his problems to a compassionate Conan O'Brien (thanks for the cameo)...
Movie Star Rating : 4  Read More