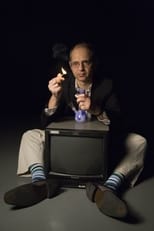 The Show About the Show

Independent Filmmaker Caveh Zahedi is trying to make a television show. He persuades BRIC TV, a Brooklyn non-profit Arts organization, to finance a television show whose premise is that every episode will be about the making of the previous episode. In the process of creating the show, everything can-and does-go wrong. The cast, a whos who of Brooklyns independent filmmaking community, includes Alex Karpovsky, Eleonore Hendricks, Dustin Defa, and Onur Tukel.

Similar Movies to The Show About the Show