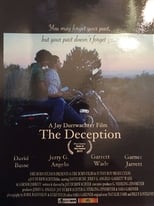 Composed of two intertwining stories, one a gay coming-of-age story of a teenager nicknamed "Chip" and his first love; the second, that same character twenty years later. Now called Christopher and in the closet, he wants a life in politics, and is about to run for the Maryland Senate with the help of his fiancées family - one of the most politically connected in Washington. But when Chris first love resurfaces in his life, a man who reignites a passion in him, Chris carefully constructed world threatens to crumble around him.

Similar Movies to The Deception