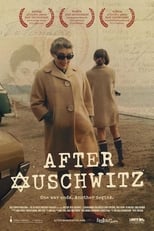 One War Ends. Another Begins.

AFTER AUSCHWITZ is a “Post-Holocaust” documentary that follows six extraordinary women, capturing what it means to move from tragedy and trauma towards life. These women all moved to Los Angeles, married, raised children and became “Americans” but they never truly found a place to call home. What makes the story so much more fascinating is how these women saw, interpreted and interacted with the changing face of America in the second half of the 20th century. They serve as our guides on an unbelievable journey, sometimes celebratory, sometimes heart breaking but always inspiring. Winner, Audience Award for Best Documentary Feature, Los Angeles Jewish Film Festival.

Similar Movies to After Auschwitz

Escape From a Nazi Death Camp

From PBS - The secret Nazi death camp at Sobibor was created solely for the mass extermination of Jews. But on the 14th of October 1943, the inmates fought back, in the biggest and most successful prison outbreak of the Second World War. Told through the firsthand accounts of four survivors-Toivi Blatt, Phillip Bialowitz, Selma Engel-Wijnberg, and former Russian POW Semjon Rozenfeld-and using dramatic reenactments, Escape From a Nazi Death Camp recounts the true horror of life at Sobibor, and the desperation, determination, and courage of its prisoners. Of the 600 inmates present on the day of the escape, 300 escaped into the forest surrounding Sobibor. Of that 300, many were shot, turned in, murdered, or captured by Nazis. Around 50 survived the war and of that 50, only a handful are still alive. Now in their 80s and 90s, this is their last chance to reveal, in their own words, the true story of the day they escaped certain death to freedom.
Movie Star Rating : 8  Read More

In Nazi-occupied France during World War II, a group of Jewish-American soldiers known as "The Basterds" are chosen specifically to spread fear throughout the Third Reich by scalping and brutally killing Nazis. The Basterds, lead by Lt. Aldo Raine soon cross paths with a French-Jewish teenage girl who runs a movie theater in Paris which is targeted by the soldiers.
Movie Star Rating : 8  Read More

The account of keepers of the Warsaw Zoo, Jan and Antonina Zabinski, who helped save hundreds of people and animals during the Nazi invasion.
Movie Star Rating : 7.3  Read More