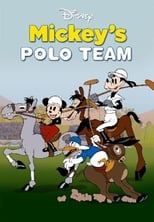 Mickey leads his polo team Donald (on a mule), Goofy, The Big Bad Wolf against an all-star team: Stan Laurel, Oliver Hardy, Harpo Marx (on an ostrich), Charles Chaplin, in a game refereed by Jack Holt. Featured spectators include the Three Little Pigs with Shirley Temple, W.C. Fields, and Clarabelle Cow with Clark Gable. Game action proceeds pretty much as you might expect from this bunch of comedians.

Mickey and the Beanstalk

Based on the timeless adventures of "Jack and the Beanstalk," Mickey, Donald and Goofy climb a fantastic beanstalk up into the sky to a place where everything is huge - the food, the castle and the fearsome giant named Willy who guards a beautiful golden harp! Will Mickey and his friends outwit the giant and make it safely back home?
Movie Star Rating : 6.7  Read More

Mickey, Donald, and Goofy are cleaning a large clock. Among the complications: Mickey fights a sleeping stork that doesn't want to leave, Donald gets tangled up in the main-spring, and Goofy is inside the bell when the clock strikes four.
Movie Star Rating : 6.9  Read More

Mickey shows off his ice-skating skills to Minnie; Goofy does some unconventional ice fishing; Donald straps skates to Pluto and laughs at his attempts to skate. Donald gets strapped to a kite and is about to be swept over a waterfall when Mickey pulls off an heroic rescue.
Movie Star Rating : 6.2  Read More

In Disney's take on the Alexander Dumas tale, Mickey Mouse, Donald Duck and Goofy want nothing more than to perform brave deeds on behalf of their queen (Minnie Mouse), but they're stymied by the head Musketeer, Pete. Pete secretly wants to get rid of the queen, so he appoints Mickey and his bumbling friends as guardians to Minnie, thinking such a maneuver will ensure his scheme's success. The score features songs based on familiar classical melodies.
Movie Star Rating : 6.4  Read More

Donald and Mickey are overdue on their rent, so the sheriff is preparing to evict them and sell their belongings. Goofy the ice-man comes by and helps them move out before the sale, but their piano doesn't want to stay on his truck. Meanwhile, Donald has a fight with a plunger and a fishbowl after removing a heater from the gas line.
Movie Star Rating : 5.6  Read More

Goofy's in the driver's seat, Mickey's in the kitchen, and Donald's in bed in Mickey's high-tech house trailer. When Goofy comes back to eat breakfast, leaving the car on autopilot, it takes them onto a dangerous closed mountain road. When Goofy realizes this, he accidentally unhooks the trailer, sending it on a perilous route. They come very close to disaster several times, while the oblivious Goofy drives on and hooks back up to them.
Movie Star Rating : 7  Read More

The gang is on vacation. Goofy has some surfing problems, Donald learns why you don't wear a grass skirt near a fire, Pluto and a starfish have a tiff, followed by an encounter with a hermit crab.
Movie Star Rating : 6.1  Read More

Mickey and Pluto go fishing. Pluto has a run-in with a clam, who eventually lodges in Pluto's mouth; Mickey thinks the clam is Pluto's tongue and can't understand why Pluto keeps begging for more food. After they get rid of the clam, Mickey's attempts to use his minnows as bait are thwarted by a hungry seagull; he brings his friends, and they chase our heroes away.
Movie Star Rating : 5.6  Read More

Pluto comes bounding outside to help Mickey get a Christmas tree. Chip 'n Dale see him and make fun of him, but the tree they take refuge in is the one Mickey chops down. They like the decorations, especially the candy canes and Mickey's bowl of mixed nuts. But Pluto spots them and goes after them long before Mickey spots them. Minnie, Donald, and Goofy drop by to sing carols.
Movie Star Rating : 7.1  Read More

Mickey Mouse is about to build Pluto a doghouse when Pluto digs up a magic lamp that speaks in black dialect. It offers to do Mickey's bidding. Mickey's first wish is for a doghouse, and the lamp starts to work. Suddenly, the saw, the planer, the paintbrush and other tools magically begin working on their own. Finally, Pluto has a magnificent doghouse. The second wish? Mickey asks the lamp to give Pluto a bath. But things go awry when Pluto accidentally breaks Mickey's radio. Now, all sorts of conflicting messages are coming out of the speaker as Mickey tries to fix it. The lamp assumes all the voices are Mickey's and obeys them. Pluto is rolled with a rolling pin, punched with boxing gloves, frozen in an aspic and is about to be cut into thin slices before all ends happily.
Movie Star Rating : 5.2  Read More