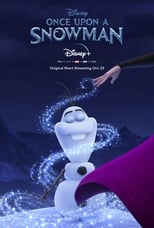 Once Upon a Snowman

It all started with a little magic

What happened to Olaf within the moments after Elsa created him as she was “letting it go” and building her ice palace, and when Anna and Kristoff first meet him in the forest? And how did Olaf learn to love Summer? The previously untold origins of Olaf, the innocent and insightful, summer-loving snowman who melted hearts in the Academy Award®-winning 2013 Disney animated feature, Frozen, and its acclaimed 2019 sequel, are revealed in the all-new Walt Disney Animation Studios animated short. The film follows Olaf’s first steps as he comes to life and searches for his identity in the snowy mountains outside Arendelle.

Similar Movies to Once Upon a Snowman

Young princess Anna of Arendelle dreams about finding true love at her sister Elsa’s coronation. Fate takes her on a dangerous journey in an attempt to end the eternal winter that has fallen over the kingdom. She's accompanied by ice delivery man Kristoff, his reindeer Sven, and snowman Olaf. On an adventure where she will find out what friendship, courage, family, and true love really means.
Movie Star Rating : 7.3  Read More

On Anna's birthday, Elsa and Kristoff are determined to give her the best celebration ever, but Elsa's icy powers may put more than just the party at risk.
Movie Star Rating : 6.8  Read More

Sam the snowman tells us the story of a young red-nosed reindeer who, after being ousted from the reindeer games because of his glowing nose, teams up with Hermey, an elf who wants to be a dentist, and Yukon Cornelius, the prospector. They run into the Abominable Snowman and find a whole island of misfit toys. Rudoph vows to see if he can get Santa to help the toys, and he goes back to the North Pole on Christmas Eve. But Santa's sleigh is fogged in. But when Santa looks over Rudolph, he gets a very bright idea...
Movie Star Rating : 7.3  Read More

On a quiet suburban street tucked within a 'safe neighborhood', a babysitter must defend a twelve-year-old boy from strangers breaking into the house, only to discover that this is far from a normal home invasion.
Movie Star Rating : 6.6  Read More

Fred Claus and Santa Claus have been estranged brothers for many years. Now Fred must reconcile his differences with his brother whom he believes overshadows him. When an efficiency expert assesses the workings at the North Pole and threatens to shut Santa down, Fred must help his brother to save Christmas.
Movie Star Rating : 5.6  Read More

Olaf is on a mission to harness the best holiday traditions for Anna, Elsa, and Kristoff.
Movie Star Rating : 6.3  Read More

A group of misfits encounter a young Yeti named Everest, and they set off to reunite the magical creature with his family on the mountain of his namesake.
Movie Star Rating : 7.6  Read More

A bright young yeti finds something he thought didn't exist—a human. News of this “smallfoot” throws the simple yeti community into an uproar over what else might be out there in the big world beyond their snowy village.
Movie Star Rating : 6.8  Read More

Each Christmas, Santa and his vast army of highly trained elves produce gifts and distribute them around the world in one night. However, when one of 600 million children to receive a gift from Santa on Christmas Eve is missed, it is deemed ‘acceptable’ to all but one—Arthur. Arthur Claus is Santa’s misfit son who executes an unauthorised rookie mission to get the last present half way around the globe before dawn on Christmas morning.
Movie Star Rating : 6.7  Read More

Into the world of the Emperor Penguins, who find their soul mates through song, a penguin is born who cannot sing. But he can tap dance something fierce!
Movie Star Rating : 6.1  Read More