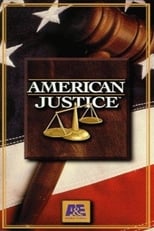 American Justice is an American criminal justice television program that aired on the A&E Network, hosted by Bill Kurtis. The show features interesting or notable cases, such as the Selena Murder of a Star, Scarsdale Diet doctor murder, the Hillside Stranglers, Matthew Shepard, or the Wells Fargo heist, with the stories told by key players, such as police, lawyers, victims, and the perpetrators themselves. More than 250 episodes were produced, making it the longest-running documentary justice show on cable. The series final new episode was produced in 2005. However, old episodes are being rerun on A&Es sister, network, The Biography Channel, under the title Notorious, with no changes to the episodes except for new credit sequences and commercial bumpers. Past episodes are also available on DVD.

Since it began in 1983, Frontline has been airing public-affairs documentaries that explore a wide scope of the complex human experience. Frontline's goal is to extend the impact of the documentary beyond its initial broadcast by serving as a catalyst for change.
TV Show Star Rating : 7.75  Read More

An anthology series written and directed by the most famous names in horror.
TV Show Star Rating : 7.135  Read More

20/20 is an American television newsmagazine that has been broadcast on ABC since June 6, 1978. Created by ABC News executive Roone Arledge, the show was designed similarly to CBS's 60 Minutes but focuses more on human interest stories than international and political subjects. The program's name derives from the "20/20" measurement of visual acuity. The hour-long program has been a staple on Friday evenings for much of the time since it moved to that timeslot from Thursdays in September 1987, though special editions of the program occasionally air on other nights.
TV Show Star Rating : 6.75  Read More

Antiques Roadshow is a British television show in which antiques appraisers travel to various regions of the United Kingdom to appraise antiques brought in by local people. It has been running since 1979. There are also international versions of the programme.
TV Show Star Rating : 6.4  Read More