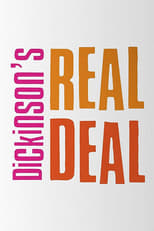 Dickinsons Real Deal is an ITV, UK modern antiques and collectables television programme presented by David Dickinson. It is broadcast on ITV as part of the afternoon schedule, and is repeated on sister channel ITV3. An American version of the show, simply titled Real Deal, was aired for one series on History, produced by Zodiak USA. The elements are the same except that the US show lacks the on-screen host for intervention on the deals.