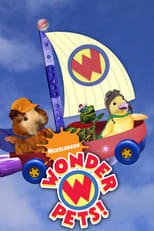 Wonder Pets! is an American animated childrens television series. It debuted on March 3, 2006, on the Nick Jr. block of the Nickelodeon cable television network and Noggin on the same day. It won an Emmy Award in 2008 for Outstanding Achievement in Music Direction and Composition in the United States.

The New Adventures of Winnie the Pooh

The bizarre misadventures of a cowardly dog named Courage and his elderly owners in a farmhouse in Nowhere, Kansas.
TV Show Star Rating : 8.187  Read More

A teenager from Earth, is brought to another universe known as Videoland to defeat the evil villainess, Mother Brain, as foretold in an Ancient Prophecy.
TV Show Star Rating : 6.2  Read More

Follow the adventures of a group of young cartoon characters who attend the Acme Looniversity to become the next generation of characters from the Looney Tunes series.
TV Show Star Rating : 7.704  Read More

As Told by Ginger focuses on middle schooler Ginger Foutley who, with her friends, tries to become more than a social geek.
TV Show Star Rating : 6.4  Read More

Grimm's Fairy Tale Classics is a Japanese animated anthology series by Nippon Animation. The episodes are adaptations of a variety of folk and fairy tales, and not limited to Grimm's Fairy Tales.
TV Show Star Rating : 7.814  Read More