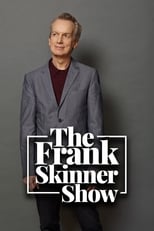 The Frank Skinner Show was a television chat show hosted by comedian Frank Skinner, which lasted nine series on British television between 1995 and 2005. As well as celebrity interviews, the shows included an initial stand-up routine, various sketches throughout the episode and usually concluded with a comedic song featuring Frank and the guest stars. The Frank Skinner Show became notorious over the years for the unconventional nature of the interviews, including some shocking revelations from the guests. The programme ended in 2005 after nine series. It was screened on BBC One from its first episode on 10 September 1995 until 3 June 1999. In 2000, the show moved to ITV. The programme was nominated for a Royal Television Society Award in 2001.

V Graham Norton was an entertainment programme shown on Channel 4 in the United Kingdom starring Graham Norton, broadcast every weeknight as a successor to the weekly So Graham Norton. It aired from 6 May 2002 to 26 December 2003. It featured celebrities who chatted with Graham and became involved in studio games which were usually laden with sexual innuendo. The studio games were later featured on the clip show Nortonland in 2007 on digital channel Challenge. The show featured a 'webcam', a roving television camera which was randomly situated in a different place in the UK each week and which followed Graham's instructions and allowed him to interact with the public live. The feature was made technically possible using digital microwave link technology provided by Rear Window Television with the 'spontaneous' webcam feature always produced as a full quality Outside Broadcast, before being made to look like a traditional webcam at the studios. The most often repeated moment involved Graham and Dustin Hoffman interacting live with a passenger of a London taxi cab driving through the city. V Graham Norton is available on 4oD through Virgin Media, but not through the PC.
TV Show Star Rating : 3.5  Read More

Group Chat with Jayden and Brent

What to expect: interviews, musical performances, a fierce band, surprising stories and most of all, guests who are more than happy to play along and follow Éric Salvail on his beautifully crazy tangents!
TV Show Star Rating : 2  Read More

Some of this year's most talked about talent open up about the challenges and triumphs of creating critically acclaimed series and performances.
TV Show Star Rating : 6  Read More

Annie-Soleil Proteau and Patrick Langlois spend an hour with a beloved and well-known figure to find out as much about them as possible and discover new aspects of their personality, in an entertaining mix of interviews and wackiness!
TV Show Star Rating : 0  Read More