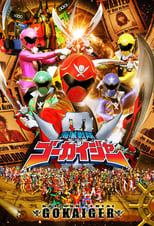 Kaizoku Sentai Gokaiger is the title of Toei Companys 35th entry in its long-running Super Sentai Series of Japanese tokusatsu television series following Tensou Sentai Goseiger. It premiered on TV Asahi on February 13, 2011, joining Kamen Rider OOO and then Kamen Rider Fourze as a program featured in TV Asahis Super Hero Time programming block. The catchphrase for the series is "Lets make it showy!". Gokaiger is a special anniversary series. Its protagonists are able to transform into not only their own unique forms, but also all of the previous 34 Super Sentai teams, each of which have their own unique power that the Gokaigers can access. The series also features reappearances of actors reprising their characters from the previous series. On July 30, 2010, Toei applied for trademarks on the title Kaizoku Sentai Gōkaijā to be used on various products. The Japan Patent Office approved these trademarks on August 26, 2010. During the Super Sentai VS Theater programming on December 26, 2010, the series was officially announced in a commercial. A Tokyo Dome City event for the premiere, serving as the introduction of the cast and theme song singers to the public, held on January 29 and 30, 2011. 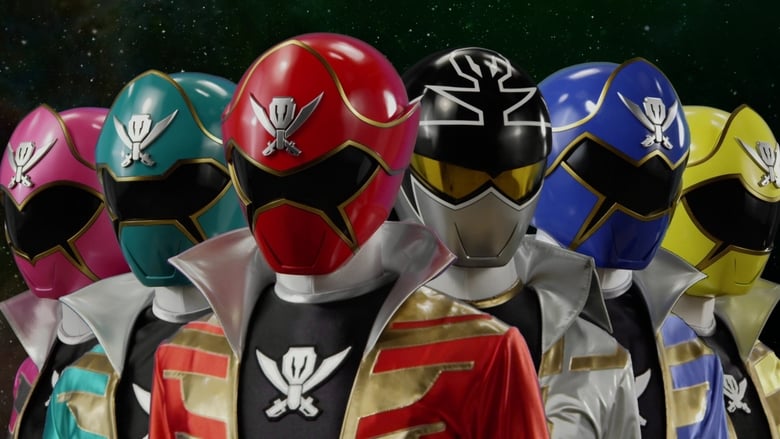 The Super Sentai Series is the name given to the long-running Japanese superhero team genre of shows produced by Toei Co., Ltd., Toei Agency and Bandai, and aired by TV Asahi. The shows are of the tokusatsu genre, featuring live action characters and colorful special effects, and are aimed mainly at children. The Super Sentai Series is one of the most prominent tokusatsu productions in Japan, alongside the Ultra Series and the Kamen Rider Series, which it currently airs alongside in the Super Hero Time programming block on Sundays. Outside Japan, the Super Sentai Series are best known as the source material for the Power Rangers franchise.
TV Show Star Rating : 3.5  Read More

A Japanese anthology series centered around a man who transforms into a bug-themed superhero.
TV Show Star Rating : 7.2  Read More

Jake and the Never Land Pirates

A crew of kid pirates - leader Jake and pals Izzy and Cubby - and their Never Land adventures as they work to outwit two infamous characters, the one and only Captain Hook and Smee.
TV Show Star Rating : 5.6  Read More

A team of teenagers with attitude are recruited to save Angel Grove from the evil witch, Rita Repulsa, and later, Lord Zedd, Emperor of all he sees, and their horde of monsters.
TV Show Star Rating : 4.8  Read More

The pirate adventures of Captain Flint and his men twenty years prior to Robert Louis Stevenson’s classic “Treasure Island.” Flint, the most brilliant and most feared pirate captain of his day, takes on a fast-talking young addition to his crew who goes by the name John Silver. Threatened with extinction on all sides, they fight for the survival of New Providence Island, the most notorious criminal haven of its day – a debauched paradise teeming with pirates, prostitutes, thieves and fortune seekers, a place defined by both its enlightened ideals and its stunning brutality.
TV Show Star Rating : 7.1  Read More

The Curse of Oak Island follows brothers Marty and Rick Lagina originally from Kingsford, Michigan through their effort to find the speculated - and as of yet undiscovered - buried treasure believed to have been concealed through extraordinary means on Oak Island. The brothers became fascinated with the island after reading the January, 1965 issue of Reader's Digest magazine which featured an article on the Restall family's work to solve the mystery of the so-called "Money Pit."
TV Show Star Rating : 7  Read More

"Where there is light, shadows lurk and fear reigns. But by the blade of Knights, Mankind was given hope." The Makai fight a secret war against the demon forces known as Horrors, evil creatures that manifest themselves through darkness to devour Humanity. On the frontlines are the Makai Knights, given the task of watching over a district and eliminating any Horrors that manifest there. GARO follows the tales of the Knights bearing the title of ‘Golden Knight Garo’, and their duty to vanquish the Horrors and protect Humanity from the darkness.
TV Show Star Rating : 9  Read More