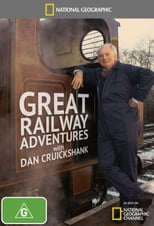 Climb up on the footplate and join historian and host Dan Cruickshank for a railway adventure like no other as he investigates how trains helped shape modern Britain. This three-part series resurrects an exhilarating age and kicks off by focusing on the railways' role in defeating Hitler, before unearthing the incredible engineering achievements of Isambard Brunel and embarking on a trip on the earliest steam engines.