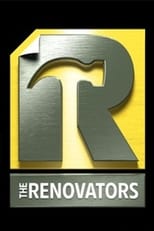 The Renovators is an Australian competitive reality renovation game show that premiered on Network Ten on 24 July 2011. The basic premise consists of 26 contestants who initially compete to become the head renovator of six run-down houses in the suburbs of Sydney, with challenges and eliminations taking place whilst the renovations are in progress. The last remaining contestant responsible for the property that has made the most profit when sold at auction wins the series. Network Ten announced in August 2011 that it had commissioned a second season of the series, but indicated that it would modify the programs format in order to address poor ratings, but to date no second season has been produced.

Similar TV Shows to The Renovators

Couples compete against each other to renovate houses and sell them at auction for the highest price.
TV Show Star Rating : 5.4  Read More

Home and Away is set in the fictional town of Summer Bay, a coastal town in New South Wales, and follows the personal and professional lives of the people living in the area. The show initially focused on the Fletcher family, Pippa and Tom Fletcher and their five foster children Frank Morgan, Carly Morris, Steven Matheson, Lynn Davenport and Sally Keating, who would go on to become one of the show's longest-running characters. The show also originally and currently focuses on the Stewart family. During the early 2000s, the central storylines focused on the Sutherlands and later, the Hunters. Home and Away had proved popular when it premiered in 1988 and had risen to become a hit in Australia, and after only a few weeks, the show tackled its first major and disturbing storyline, the rape of Carly Morris; it was one of the first shows to feature such storylines during the early timeslot. H&A has tackled many adult-themed and controversial storylines; something rarely found in its restricted timeslot.
TV Show Star Rating : 6.2  Read More

Jon Taffer is the Gordon Ramsay of the bar and nightclub business. In each episode, Taffer helps transform a struggling bar into a vibrant, profitable business, utilizing his expertise as a nightlife consultant
TV Show Star Rating : 8.4  Read More

Neighbours is an Australian television soap opera. The show's storylines concern the domestic and professional lives of the people who live and work in Erinsborough, a fictional suburb of Melbourne, Victoria. The series primarily centres around the residents of Ramsay Street, a short cul-de-sac, and its neighbouring areas, the Lassiters complex, which includes a bar, hotel, cafe, news office and park. Neighbours began with three families created by Watson – the Ramsays, the Robinsons and the Clarkes. Watson said that he wanted to show three families who are friends living in a small street. The Robinsons and the Ramsays had a long history and were involved in an ongoing rivalry.
TV Show Star Rating : 6.3  Read More

H2O: Just Add Water revolves around three teenage girls facing everyday teen problems with an added twist: they cope with the burden of growing a giant fin and transforming into mermaids whenever they come in contact with water.
TV Show Star Rating : 7.2  Read More

McLeod's Daughters is an Australian television series that began airing on the Nine Network on 8 August 2001. This Logie award winning drama series follows the lives of half sisters Claire and Tess McLeod as they embark on a mission: to run Drovers Run, a farm that has been in the McLeod family for generations. After being passed down from father to son, Drover's has now reunited Claire and Tess after 20 years. They now have to run a farm while balancing their lives, loves and losses.
TV Show Star Rating : 7.6  Read More