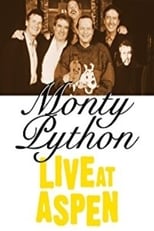 Monty Python Live at Aspen was a reunion show featuring the five surviving members of Monty Python: John Cleese, Terry Gilliam, Eric Idle, Terry Jones, and Michael Palin. Graham Chapman was also allegedly in attendance as his "ashes" were brought out in an urn. The Pythons looked back at their work and received an American Film Industry award. It also featured some memorable moments when Gilliam accidentally kicked over the urn, which Eric Idle said was their biggest audience laugh ever. It was hosted by Robert Klein and featured a cameo by Eddie Izzard. The show was released on DVD by A&E Home Entertainment as part of the Monty Python Live compilation.

A late-night live television sketch comedy and variety show created by Lorne Michaels. The show's comedy sketches, which parody contemporary culture and politics, are performed by a large and varying cast of repertory and newer cast members. Each episode is hosted by a celebrity guest, who usually delivers an opening monologue and performs in sketches with the cast, and features performances by a musical guest.
TV Show Star Rating : 6.6  Read More

A live weekly online series, hosted by The Verge, that dives into the complexities of USA Network's critically acclaimed hacker drama, Mr. Robot. Each episode features an in-depth discussion about the most recent episode of Mr. Robot from both an artistic and technological perspective.
TV Show Star Rating : 10  Read More

KET’s Jubilee series features the performances of nationally known artists and popular local musicians at summer folk music festivals in Kentucky. Since its premiere in 1996, Jubilee has presented an eclectic mix of traditional and contemporary bluegrass, blues, folk, gospel, and other forms of music from around the world to your backyard.
TV Show Star Rating : 0  Read More