Matador chronicles the unlikely rise of Tony "Matador" Bravo, a popular soccer star who comes to be known as much for his playboy antics off the field as his dynamic moves on it. But what his fans and family dont realize is that its all a cover—in truth, he is a skilled covert operative executing missions for a little-known branch of the CIA. “Matador” has the kind of fame and notoriety that affords him access to powerful circles of corruption and villainy. But, in balancing the dueling roles in which hes been cast, he will be forced to confront the question of his true identity… and it is this mission which will prove to be his most dangerous. 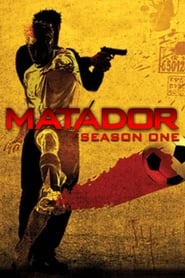 Somewhere in Southern California, in a drug raid run by the US government, a beachfront property was seized and turned into a residence for undercover cops. They are all top agents of the DEA, FBI, and Customs and they are living in this house unofficially known as "Graceland". "Graceland" is a place full of secrets, and bad, good, and blurred moments too. The only idyllic thing is its outside look, but the lives of its residents are nothing like it. The lies which are in the base of their undercover work, are formed a web of lies that pervades everything. Coming of a new graduating at the top of his class, FBI rookie, Mike Warren, could make the life of a legendary FBI agent Paul Briggs and the others, more complicated or it could reveal the truth. It is based upon actual events.
TV Show Star Rating : 7  Read More

The Pretender is an American television series that aired on NBC from 1996 to 2000. The series starred Michael T. Weiss as Jarod, a genius and former child prodigy with the ability to become anyone he wants to be, i.e., to flawlessly impersonate anyone in virtually any line of work. Patrick Bauchau and Andrea Parker co-starred as Sydney, Jarod's childhood teacher and mentor, and Miss Parker, a childhood friend. They are both operatives for a mysterious organization called "The Centre", which took Jarod from his parents as a child and developed his special talents with the intention of making him one of their agents, while also using his brilliant intellect for their own evil purposes. After escaping from their custody, Jarod begins traveling the country, searching for clues to his true identity while posing as a doctor, police officer, attorney, or some other character who helps those in trouble. The Centre's directors are determined to return Jarod to The Centre to further their mysterious plan. A team of operatives, led by Miss Parker, attempts to find and capture The Pretender. Jarod's extreme intelligence combined with his childlike innocence create a memorable and endearing character that was popular with viewers.
TV Show Star Rating : 7.3  Read More

The passionate story of an elementary school student whose thoughts and dreams revolve almost entirely around the love of soccer. 11-year-old Tsubasa Oozora started playing football at a very young age, and while it was mostly just a recreational sport for his friends, for him, it developed into something of an obsession. In order to pursue his dream to the best of his elementary school abilities, Tsubasa moves with his mother to Nankatsu city, which is well-known for its excellent elementary school soccer teams. But although he was easily the best in his old town, Nankatsu has a lot more competition, and he will need all of his skill and talent in order to stand out from this new crowd. He encounters not only rivals, but also new friends like the pretty girl Sanae Nakazawa and the talented goalkeeper, Genzo Wakabayashi, who shares the same passion as Tsubasa, and will prove to be a treasured friend in helping him push towards his dreams. Representing Japan in the FIFA World Cup is Tsubasa’s ultimate dream, but it will take a lot more than talent to reach it.
TV Show Star Rating : 6.5  Read More

21 Jump Street is an American police procedural crime drama television series that aired on the Fox Network and in first run syndication from April 12, 1987, to April 27, 1991, with a total of 103 episodes. The series focuses on a squad of youthful-looking undercover police officers investigating crimes in high schools, colleges, and other teenage venues. It was originally going to be titled Jump Street Chapel, after the deconsecrated church building in which the unit has its headquarters, but was changed at Fox's request so as not to mislead viewers into thinking it was a religious program. Created by Patrick Hasburgh and Stephen J. Cannell, the series was produced by Patrick Hasburgh Productions and Stephen J. Cannell Productions in association with 20th Century Fox Television. Executive Producers included Hasburgh, Cannell, Steve Beers and Bill Nuss. The show was an early hit for the fledgling Fox Network, and was created to attract a younger audience. The final season aired in first-run syndication mainly on local Fox affiliates. It was later rerun on the FX cable network from 1996 to 1998. The series provided a spark to Johnny Depp's nascent acting career, garnering him national recognition as a teen idol. Depp found this status irritating, but he continued on the series under his contract and was paid $45,000 per episode. Eventually he was released from his contract after the fourth season. A spin-off series, Booker, was produced for the character of Dennis Booker; it ran one season, from September 1989 to June 1990. A film adaptation starring Jonah Hill and Channing Tatum was released on March 16, 2012.
TV Show Star Rating : 6.1  Read More

Tsubasa Ozora moves to the town Nankatsu to increase his skills as a soccer player. He is challanged by the Super Goalkeeper Genzo Wakabayashi. He then agree to compete and see who was the best soccer player there.
TV Show Star Rating : 7  Read More

The police woman Hanna Svensson has a strained relationship to her son after having arrested him for drug dealing. Her married police man lover disappears, possibly kidnapped by MC gangs, although ties to Bosnia also appear.
TV Show Star Rating : 5.5  Read More

Working for the FBI's Deep Cover Operations division, Martin Odum can transform himself into a different person - whether it's an assignment as a Serbian extremist, a corrupt Chicago police officer, a British special forces colonel, or a legendary computer hacker. But when he learns that his life, itself, may be a lie, he faces the demands of his job and a desire to solve the mystery of his identity. And given the choice between the two, Odum doesn't always make the right decision. From the producers of "Homeland," "Legends" is based on Robert Littell's award-winning book.
TV Show Star Rating : 6.4  Read More