An undercover reporter and his former mentor join forces to solve mysteries on a Spanish island. Woody is forced to go on the run from the British authorities after being set up by his corrupt newspaper editor. Woody escapes to find the one man he can trust, his former mentor at the newspaper, Brutus. Now an expatriate living a quiet life running a bar on a Spanish island, Brutus is initially less than thrilled to see Woody. However, he soon realizes that he can profit by putting his trouble-making protege to work. Woody takes on a series of investigations on the island, running rings around the locals by using his astonishing ability to adopt a variety of guises at a moments notice. 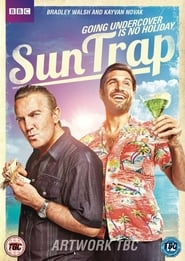 Mad Dogs is a British black comedy and psychological thriller television series created by Cris Cole that began airing on Sky1 on 10 February 2011. It is produced by Left Bank Pictures, and co-produced by Palma Pictures. The series stars John Simm, Marc Warren, Max Beesley, and Philip Glenister as four long-time and middle-aged friends getting together in a villa in Majorca to celebrate the early retirement of their friend Alvo. However, after Alvo is murdered, the group find themselves caught up in the world of crime and police corruption. The series was initially a story about a rock band, but changed after a feeling that bands have been "done to death". After gaining interest from some terrestrial networks, the series was commissioned by British Sky Broadcasting. Filming took place on location throughout the island of Majorca in May 2010, and took around four million euros and 44 days to make. The main themes are friendship and growing older; Glenister said it is about ageing and "getting closer to death". Photographer David LaChapelle directed three 30-second advertisements for the series. Mad Dogs opened with 1.61 million viewers, the 17th highest rated programme ever for Sky1, and attracted positive reactions from critics. They noted similarities with British gangster films, more predominantly the 2000 film Sexy Beast.
TV Show Star Rating : 7.3  Read More

Auf Wiedersehen Pet is a British comedy-drama series about seven British migrant construction workers who leave the UK to search for employment overseas. In the first series, they live and work on a building site in Düsseldorf, Germany. In the second series, they work for a dodgy businessman on a manor in the English countryside, and then his swimming pool at his villa in Spain. In the third series, set fifteen years later, they reunite for a big job on the Middlesbrough transporter bridge which results in them working in Arizona. In the fourth series, they work on a British embassy in Havana, Cuba. The lead roles were performed by Tim Healy, Kevin Whately, Jimmy Nail, Gary Holton, Christopher Fairbank, Pat Roach and Timothy Spall. Auf Wiedersehen, Pet was created by Franc Roddam after an idea from Mick Connell came to light. It was mostly written by Dick Clement and Ian La Frenais, who also wrote The Likely Lads, Whatever Happened to the Likely Lads? and Porridge. Stan Hey also contributed writing a number of episodes. The first two series were co-produced by Clement and LaFrenais's Witzend Productions and Central Television and the series were broadcast on ITV in 1983-1984 and 1986. A successful revival of the show saw two series and a Christmas special shown on BBC One in 2002 and 2004. The show was the subject of the first episode of the BBC documentary series Drama Connections.
TV Show Star Rating : 8.6  Read More