Do you have what it takes to be a Citizen?

The war against the Bugs continues! A Federation Starship crash-lands on the distant Alien planet OM-1, stranding beloved leader Sky Marshal Anoke and several others, including comely but tough pilot Lola Beck. Its up to Colonel/General Johnny Rico, reluctant hero of the original Bug Invasion on Planet P, to lead a team of Troopers on a daring rescue mission. 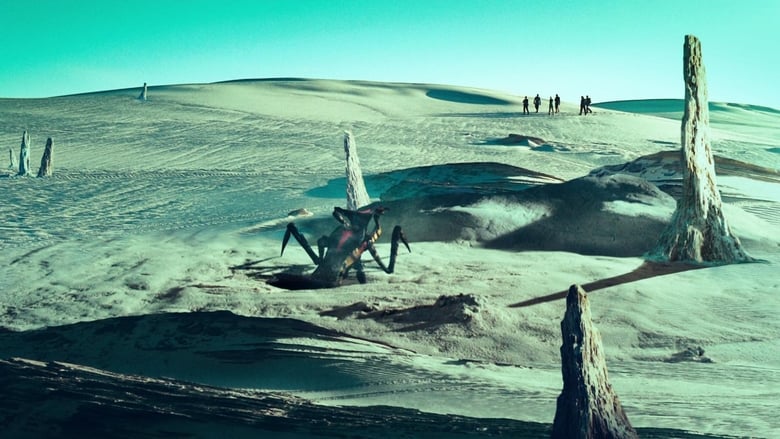 A distant Federation outpost Fort Casey comes under attack by bugs. The team on the fast attack ship Alesia is assigned to help the Starship John A. Warden stationed in Fort Casey evacuate along with the survivors and bring military intelligence safely back to Earth. Carl Jenkins, now ministry of Paranormal Warfare, takes the starship on a clandestine mission before its rendezvous with the Alesia and goes missing in the nebula. Now, the battle-hardened troopers are charged with a rescue mission that may lead to a much more sinister consequence than they ever could have imagined....
Movie Star Rating : 5.6  Read More

Two fledgling criminals kidnap a pizza delivery guy, strap a bomb to his chest, and advise him that he has mere hours to rob a bank or else...
Movie Star Rating : 5.6  Read More

The story unfolds over the course of one night, during a lunar eclipse, in the home of Alfonso and Eva—a well-healed professional couple worried about their teenage daughter and about the monotony of their lives. They are joined by five guests: Eduardo and Blanco, Antonio and Ana and Pepe. It’s a dinner party like any other, until someone has an intriguing idea: what if they put their mobile phones at the disposition of the group, leaving them in the middle of the table for everyone to see?
Movie Star Rating : 7  Read More

When an asteroid threatens to collide with Earth, NASA honcho Dan Truman determines the only way to stop it is to drill into its surface and detonate a nuclear bomb. This leads him to renowned driller Harry Stamper, who agrees to helm the dangerous space mission provided he can bring along his own hotshot crew. Among them is the cocksure A.J. who Harry thinks isn't good enough for his daughter, until the mission proves otherwise.
Movie Star Rating : 6.5  Read More

During its return to the earth, commercial spaceship Nostromo intercepts a distress signal from a distant planet. When a three-member team of the crew discovers a chamber containing thousands of eggs on the planet, a creature inside one of the eggs attacks an explorer. The entire crew is unaware of the impending nightmare set to descend upon them when the alien parasite planted inside its unfortunate host is birthed.
Movie Star Rating : 8  Read More

When scientists discover something in the Arctic that appears to be a buried Pyramid, they send a research team out to investigate. Little do they know that they are about to step into a hunting ground where Aliens are grown as sport for the Predator race.
Movie Star Rating : 5.6  Read More

In the film that launched the James Bond saga, Agent 007 battles mysterious Dr. No, a scientific genius bent on destroying the U.S. space program. As the countdown to disaster begins, Bond must go to Jamaica, where he encounters beautiful Honey Ryder, to confront a megalomaniacal villain in his massive island headquarters.
Movie Star Rating : 6.9  Read More

Austin Powers: The Spy Who Shagged Me

When diabolical genius, Dr. Evil travels back in time to steal superspy Austin Powers's ‘mojo’, Austin must return to the swingin' '60s himself – with the help of American agent, Felicity Shagwell – to stop the dastardly plan. Once there, Austin faces off against Dr. Evil's army of minions and saves the world in his own unbelievably groovy way.
Movie Star Rating : 6.2  Read More

When Ripley's lifepod is found by a salvage crew over 50 years later, she finds that terra-formers are on the very planet they found the alien species. When the company sends a family of colonists out to investigate her story, all contact is lost with the planet and colonists. They enlist Ripley and the colonial marines to return and search for answers.
Movie Star Rating : 7.8  Read More

History comes gloriously to life in Disney's epic animated tale about love and adventure in the New World. Pocahontas is a Native American woman whose father has arranged for her to marry her village's best warrior. But a vision tells her change is coming, and soon she comes face to face with it in the form of Capt. John Smith.
Movie Star Rating : 6.8  Read More

During the transportation of a Space Shuttle a Boeing 747 crashes in the Atlantic Ocean yet when they go to look for the destroyed shuttle it is not there. James Bond investigates the missing mission space shuttle and soon learns that the shuttles owner Hugo Drax wants to kill all of mankind.
Movie Star Rating : 5.9  Read More