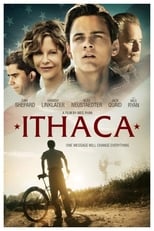 One message will change everything.

In a small town in Californias San Joaquin Valley, 14-year-old Homer Macauley is determined to be the best and fastest bicycle telegraph messenger anyone has ever seen. His older brother has gone to war, leaving Homer to look after his widowed mother, his older sister and his 4-year-old brother, Ulysses. And so it is that as spring turns to summer, 1942, Homer Macauley delivers messages of love, hope, pain... and death... to the good people of Ithaca. And Homer Macauley will grapple with one message that will change him forever - from a boy into a man. Based on Pulitzer Prize-winning author William Saroyans 1943 novel, The Human Comedy, ITHACA is the quintessential wartime tale of the Home Front. It is a coming-of-age story about the exuberance of youth, the sweetness of life, the sting of death and the modesty and sheer goodness that lives in each and every one of us.

Under the pretense of having a picnic, a geologist takes his teenage daughter and 6-year-old son into the Australian outback and attempts to shoot them. When he fails, he turns the gun on himself, and the two city-bred children must contend with harsh wilderness alone. They are saved by a chance encounter with an Aborigine boy who shows them how to survive, and in the process underscores the disharmony between nature and modern life.
Movie Star Rating : 7.4  Read More

The Edge of Seventeen

Sexual Chronicles of a French Family

A romantic comedy centered on Dexter and Emma, who first meet during their graduation in 1988 and proceed to keep in touch regularly. The film follows what they do on July 15 annually, usually doing something together.
Movie Star Rating : 7.1  Read More

Call Me by Your Name

Elio Perlman is spending the summer with his family at their vacation home in Lombardy, Italy. When his father hires a handsome doctoral student, the curious 17-year-old finds himself developing a growing attraction to the young man.
Movie Star Rating : 8.3  Read More

The story is set in 1962 Louisiana. The big Batiste family is headed by charming doctor Louis. Though he is married to beautiful Roz, he has a weakness for attractive women patients. One day Louis is flirting with married and sexy Metty Mereaux, not knowing that he is observed by his youngest idealistic daughter Eve, who is there by accident. Eve can not forget the incident which is traumatic for her naiveté, and shares a secret with older sister Cisely. Lies start to roll...
Movie Star Rating : 6.4  Read More

Lost and Delirious is the story of three adolescent girls' first love, their discovery of sexual passion, and their search for identities. Set in a posh, private boarding school surrounded by luxuriant, green forest, Lost and Delirious moves swiftly from academic routine, homesickness, and girlish silliness to the darker region of lover's intrigue.
Movie Star Rating : 6.9  Read More

A sister and brother face the realities of familial responsibility as they begin to care for their ailing father.
Movie Star Rating : 6.7  Read More

At the turn of the century on Prince Edward Island, Matthew Cuthbert and his sister Marilla decide to take on an orphan boy as help for their farm. But they get an unexpected jolt when they're mistakenly sent a girl instead: Anne Shirley. Anne's a dreamer with an unusual point of view, far removed from Marilla's pragmatic ways, and it's only on trial that Marilla agrees to keep Anne.
Movie Star Rating : 8.2  Read More