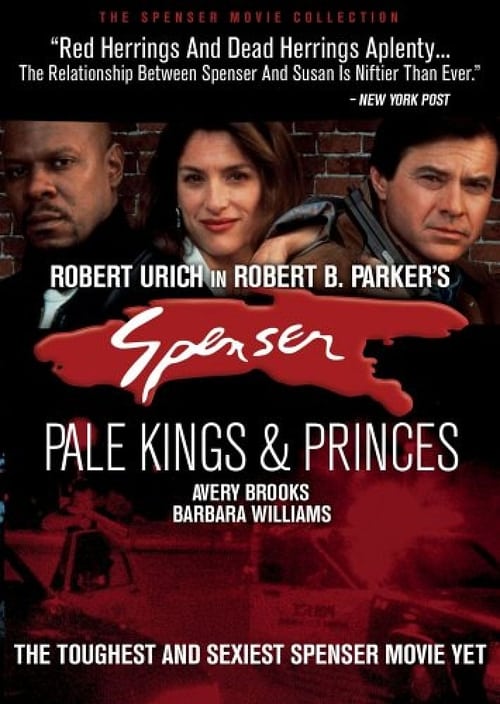 Plot : When Spenser (Robert Urich), his psychologist girlfriend, Susan Silverman (Barbara Williams), and his right-hand man, Hawk (Avery Brooks), investigate a brutal murder in a quaint New England town, they discover plenty of illegal activity and cocaine. This 1994 made-for-television movie brings many of the beloved characters from the 1980s drama series (based on the books by Robert B. Parker) back to the small screen.

Selfish yuppie Charlie Babbitt's father left a fortune to his savant brother Raymond and a pittance to Charlie; they travel cross-country.

Less than 24 hours into his parole, charismatic thief Danny Ocean is already rolling out his next plan: In one night, Danny's hand-picked crew of specialists will attempt to steal more than $150 million from three Las Vegas casinos. But to score the cash, Danny risks his chances of reconciling with ex-wife, Tess.

Ben Sanderson, an alcoholic Hollywood screenwriter who lost everything because of his drinking, arrives in Las Vegas to drink himself to death. There, he meets and forms an uneasy friendship and non-interference pact with prostitute Sera.

Danny Ocean's team of criminals are back and composing a plan more personal than ever. When ruthless casino owner Willy Bank doublecrosses Reuben Tishkoff, causing a heart attack, Danny Ocean vows that he and his team will do anything to bring down Willy Bank along with everything he's got. Even if it means asking for help from an enemy.

In early-1970s Las Vegas, Sam "Ace" Rothstein gets tapped by his bosses to head the Tangiers Casino. At first, he's a great success in the job, but over the years, problems with his loose-cannon enforcer Nicky Santoro, his ex-hustler wife Ginger, her con-artist ex Lester Diamond and a handful of corrupt politicians put Sam in ever-increasing danger.

When larcenous real estate clerk Marion Crane goes on the lam with a wad of cash and hopes of starting a new life, she ends up at the notorious Bates Motel, where manager Norman Bates cares for his housebound mother.

Raoul Duke and his attorney Dr. Gonzo drive a red convertible across the Mojave desert to Las Vegas with a suitcase full of drugs to cover a motorcycle race. As their consumption of drugs increases at an alarming rate, the stoned duo trash their hotel room and fear legal repercussions. Duke begins to drive back to L.A., but after an odd run-in with a cop, he returns to Sin City and continues his wild drug binge.

Diamonds are stolen only to be sold again in the international market. James Bond infiltrates a smuggling mission to find out who's guilty. The mission takes him to Las Vegas where Bond meets his archenemy Blofeld.

He's Ace Ventura: Pet Detective. Jim Carrey is on the case to find the Miami Dolphins' missing mascot and quarterback Dan Marino. He goes eyeball to eyeball with a man-eating shark, stakes out the Miami Dolphins and woos and wows the ladies. Whether he's undercover, under fire or underwater, he always gets his man… or beast!

When the government puts all its rotten criminal eggs in one airborne basket, it's asking for trouble. Before you can say, "Pass the barf bag," the crooks control the plane, led by creepy Cyrus "The Virus" Grissom. Watching his every move is the just-released Cameron Poe, who'd rather reunite with his family.

John Gage offers a down-on-his-luck yuppie husband $1 million for the opportunity to spend the night with the man's wife.