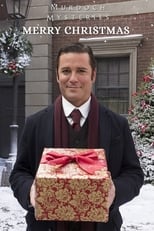 A Merry Murdoch Christmas is the first stand-alone two hour Christmas special that aired on December 21, 2015 in Canada, and on December 20, 2015 in France. "The thing that I like the most about having the opportunity to do a Christmas special is that it means Murdoch Mysteries has become one of those shows that is loved and admired by a strong loyal audience," said the weekly dramas executive producer, Peter Mitchell. The special follows Detective Murdoch and the team at Station House No. 4 who are called to investigate when a rich philanthropist is murdered, which may result in many of Toronto’s underprivileged losing Christmas after the presents he hands out every year go missing. As the investigation unfolds, Murdoch believes he has found the murderer in one Cyrus Lynch, but when he turns up dead and the presents are still missing, Murdoch and colleagues have to find out who killed him.