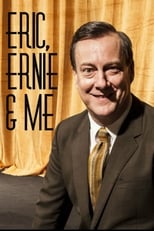 Eric, Ernie and Me

For over a decade, an ex-market stall trader from Liverpool called Eddie Braben wrote the scripts that made the nation take Morecambe and Wise to their hearts. But for Braben, it wasnt all sunshine. Beginning in 1969 with the birth of the golden triangle of Eric, Ernie and Eddie, this film chronicles the grind that pushed the perfectionist Braben to the brink of exhaustion, culminating in the triumphant Christmas Day show of 1977.

Similar Movies to Eric, Ernie and Me