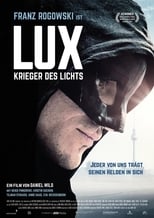 The shy late twenties Torsten tile lives with his mother in a bleak Berlin slab. In the guise of his alter ego "Lux - Warrior of Light" he tries to make the world a little bit better. He distributes food to the homeless and helps out on his forays through the city wherever he can. A film crew accompanies him to make a documentary about the social engagement of the self-appointed real-life superhero. Jan, the director, is still looking for a donor. The resourceful producer Brandt shows interest, but on condition that he sees something spectacular.