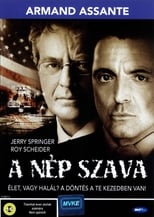 Marty Rockman, the notorious producer of the hit reality-TV show "So Sue Me", has a brand new concept: "Citizen Verdict". Each week a real criminal case will be tried before the American people, but this time theyre also the jury. If the defendant is voted guilty in a death penalty case, Rockman will televise the execution. When an escalation in violent crime and terrorism hits the state of Florida, Governor Tyler, desperate to be seen as a tough-on-crime Republican leader in the upcoming Presidential race, decides to give Rockman his chance and "Citizen Verdict" goes into production in Tampa. Selected by phone-in vote, the shows first contestant is Ricky Carr -- a man accused of the rape and murder of popular celebrity-chef Dolly Hamilton. The case is a surefire ratings winner. But when an investigation begins, it becomes apparent that Ricky may be innocent of murder.