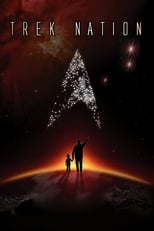 Trek Nation is a documentary film directed by Scott Colthorp examining the positive impact that Star Trek and creator Gene Roddenberry may have had on peoples lives as seen through the eyes of his son, Eugene Roddenberry, Jr. ("Rod"). It includes interviews with castmembers and crew from all five Star Trek shows, as well as various fans and celebrities who were markedly influenced by the show while growing up. Rod Roddenberry also visits Skywalker Ranch to interview George Lucas on the influence that Star Trek had on him. Lucas shares how he had gone to Star Trek conventions prior to creating Star Wars.

The epic saga continues as Luke Skywalker, in hopes of defeating the evil Galactic Empire, learns the ways of the Jedi from aging master Yoda. But Darth Vader is more determined than ever to capture Luke. Meanwhile, rebel leader Princess Leia, cocky Han Solo, Chewbacca, and droids C-3PO and R2-D2 are thrown into various stages of capture, betrayal and despair.
Movie Star Rating : 8.38  Read More

Return of the Jedi

Luke Skywalker leads a mission to rescue his friend Han Solo from the clutches of Jabba the Hutt, while the Emperor seeks to destroy the Rebellion once and for all with a second dreaded Death Star.
Movie Star Rating : 7.921  Read More

Anakin Skywalker, a young slave strong with the Force, is discovered on Tatooine. Meanwhile, the evil Sith have returned, enacting their plot for revenge against the Jedi.
Movie Star Rating : 6.499  Read More

The evil Darth Sidious enacts his final plan for unlimited power - and the heroic Jedi Anakin Skywalker must choose a side.
Movie Star Rating : 7.351  Read More

The Hitchhikers Guide to the Galaxy

Mere seconds before the Earth is to be demolished by an alien construction crew, Arthur Dent is swept off the planet by his friend Ford Prefect, a researcher penning a new edition of "The Hitchhiker's Guide to the Galaxy."
Movie Star Rating : 6.672  Read More

When the renegade crew of Serenity agrees to hide a fugitive on their ship, they find themselves in an action-packed battle between the relentless military might of a totalitarian regime who will destroy anything – or anyone – to get the girl back and the bloodthirsty creatures who roam the uncharted areas of space. But... the greatest danger of all may be on their ship.
Movie Star Rating : 7.388  Read More

In 2257, a taxi driver is unintentionally given the task of saving a young girl who is part of the key that will ensure the survival of humanity.
Movie Star Rating : 7.495  Read More

Humanity finds a mysterious object buried beneath the lunar surface and sets off to find its origins with the help of HAL 9000, the world's most advanced super computer.
Movie Star Rating : 8.069  Read More