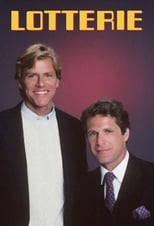 Lottery! is an American drama series that premiered on ABC on September 9, 1983. The series aired for one season of 17 episodes and starred Ben Murphy as Patrick Sean Flaherty, and Marshall Colt as Eric Rush. Lottery! centered around ordinary people who have won the lottery--all of a sudden becoming millionaires--and how it changes their lives.

Chances was an Australian evening soap opera, produced from 1991 to 1992. It told the story of the average middle-class Taylor family whose lives are transformed by winning $3 million in the lottery. The series was broadcast by the Nine Network, initially as two one-hour episodes each week. Principal cast members included John Sheerin and Brenda Addie as Dan and Barbara Taylor, Jeremy Sims as their mischievous son Alex, Deborah Kennedy as Dan's sister Connie Reynolds, Tim Robertson as Dan's brother Jack, Anne Grigg as his wife Sarah, and Michael Caton as neighbourhood friend Bill Anderson. Originally, creator Lynn Bayonas pitched the show as a family-oriented drama; however to help ensure the program's success, Channel Nine asked for nude scenes and risqué elements to also be included in the series. Initial publicity for the show focused on the sex angle, and it was for this that Chances was chiefly known.
TV Show Star Rating : 0  Read More

An anthology series that explored the ways sudden and unexpected wealth changed life for better or for worse. It told the stories of people who were given one million dollars from a benefactor who insisted they never know him, with one exception.
TV Show Star Rating : 5  Read More

What would you do if you won the lottery? How would it change your life? Follow a group of seven gas station employees in Queens, New York, who have been chipping into a lottery pool for years, never thinking they'd actually win. They need to be careful what they wish for, because while the money could solve problems for each of them, it will forever change the close-knit bonds these friends have formed.
TV Show Star Rating : 4.571  Read More

Lottery! is an American drama series that premiered on ABC on September 9, 1983. The series aired for one season of 17 episodes and starred Ben Murphy as Patrick Sean Flaherty, and Marshall Colt as Eric Rush. Lottery! centered around ordinary people who have won the lottery-all of a sudden becoming millionaires-and how it changes their lives.
TV Show Star Rating : 5.5  Read More

Windfall is a serial drama television series about a group of people in an unnamed small city who win almost $400,000,000 in a lottery.
TV Show Star Rating : 0  Read More

At Home with the Braithwaites

At Home with the Braithwaites is a British comedy-drama television series, created and written by Sally Wainwright. The storyline follows a suburban family from Leeds, whose life is turned upside down when the mother of the family wins 38 million pounds on the lottery. It was broadcast on ITV, for 26 episodes, from 20 January 2000 to 9 April 2003. At the beginning of the first series, each member of the Braithwaite family has an issue. Alison has to decide what to do with the winnings, and when to tell her family. David is having an affair with Elaine, his secretary at work. Virginia is on the verge of flunking out of university. Sarah has a crush on her drama teacher. Charlotte suspects that her mother may be the mystery lottery winner.
TV Show Star Rating : 7.8  Read More

After winning the lottery, the Habib family move into Sydney's richest suburb to live the Australian dream, but their poshy next door neighbours are not all to happy about it.
TV Show Star Rating : 3.667  Read More