The Armando Iannucci Shows is a series of eight programmes directed by Armando Iannucci and written by Iannucci with Andy Riley and Kevin Cecil. It was shown on UKs Channel 4 from September to October 2001. Each episode focused on specific themes relating to human nature and existentialism, around which Iannucci would weave a series of surreal sketches and monologues. Recurring themes in the episodes are the superficiality of modern culture, our problems communicating with each other, the mundane nature of working life and feelings of personal inadequacy and social awkwardness. Several characters also make repeat appearances in the shows, including the East End thug, who solves every problem with threats of violence; Hugh, an old man who delivers surreal monologues about what things were like in the old days; and Iannuccis barber, who is full of nonsensical anecdotes. Iannucci has been quoted as saying it is the comedy series he is most proud of making. He told The Metro in April 2007 "The Armando Iannucci Show [sic] on Channel 4 came out around 9/11, so it was overlooked for good reasons. People had other things on their minds. But that was the closest to me expressing my comic outlook on life." 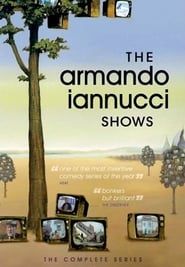 Vic Reeves Big Night Out is a British cult comedy stage show and later TV series which ran on Channel 4 for two series in 1990 and 1991, as well as a New Year special. It marked the beginnings of the collaboration between Vic Reeves and Bob Mortimer and started their Vic and Bob comedy double act. The show was later acknowledged as a seminal force in British comedy throughout the 1990s and which continues to the present day. Arguably the most surreal of the pair's work, Vic Reeves Big Night Out was effectively a parody of the variety shows which dominated the early years of television, but which were, by the early 1990s, falling from grace. Vic, introduced by Patrick Allen as "Britain's Top Light Entertainer and Singer", would sit behind a cluttered desk talking nonsense and introducing the various segments and surreal guests on the show. Vic Reeves Big Night Out is notable as the only time in their career where Vic solely took the role of host, while Bob was consigned to the back stage, appearing every few minutes as either himself or as a strange character. The two received equal billing in the series credits. On 3 October 2007, the first episode was re-broadcast on More4 as part of Channel 4 at 25, a season of classic Channel 4 programmes shown to celebrate the channel's 25th birthday.
TV Show Star Rating : 9  Read More

Jam is a postmodern British dark comedy series created, written and directed by Chris Morris, and was broadcast on Channel 4 during March and April 2000. It was based on the earlier BBC Radio 1 show, Blue Jam, and consisted of a series of unsettling sketches unfolding over an ambient soundtrack. Many of the sketches re-used the original radio soundtracks with the actors lip-synching their lines, an unusual technique which added to the programme's unsettling atmosphere. The cast, which comprised people who Morris had worked with on his earlier TV work such as The Day Today and Brass Eye, included Amelia Bullmore, David Cann, Julia Davis, Kevin Eldon and Mark Heap, as well as occasional appearances from Morris himself. It was written by Chris Morris and Peter Baynham, with additional material contributed by Jane Bussmann, David Quantick, Graham Linehan, Arthur Mathews and the cast.
TV Show Star Rating : 6  Read More

The Goodies is a British television comedy series of the 1970s and early 1980s. The series, which combines surreal sketches and situation comedy, was broadcast by BBC 2 from 1970 until 1980 — and was then broadcast by the ITV company LWT for a year, between 1981 to 1982. The show was co-written by and starred Tim Brooke-Taylor, Graeme Garden and Bill Oddie. Bill Oddie also wrote the music and songs for the series — while "The Goodies Theme" was co-written by Bill Oddie and Michael Gibbs. The directors/producers of the series were John Howard Davies, Jim Franklin and Bob Spiers. An early title which was considered for the series was Narrow Your Mind and prior to that the working title was Super Chaps Three.
TV Show Star Rating : 7.3  Read More

The Mighty Boosh is a British comedy television show created by Julian Barratt, Noel Fielding and others. The Mighty Boosh is a comic fantasy containing humour and pop-culture references. Episodes often featured elaborate musical numbers in different genres, such as electro, heavy metal, funk, and rap. The show has been known for popularising a style called "crimping"; short a cappella songs which are present throughout all three series. Julian Barratt wrote the music within the show, and performs it with Noel Fielding. Fielding also designed many of the show's graphics and artwork. The TV series has many animated sequences, puppets and special effects. Barratt has said that he approached Fielding with the idea of doing a show like The Goodies, as if it were a complete "world" rather than simply a sketch show. Barratt and Fielding play many of the recurring and one-off characters themselves, with other characters being played by other Boosh members Rich Fulcher, Dave Brown, and Michael Fielding.
TV Show Star Rating : 7.5  Read More