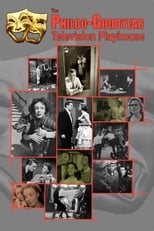 The Goodyear Television Playhouse is an American anthology series that was telecast live on NBC from 1951 to 1957 during the "Golden Age of Television". Sponsored by Goodyear, Goodyear alternated sponsorship with Philco, and the Philco Television Playhouse was seen on alternate weeks. In 1955, the title was shortened to The Goodyear Playhouse and it aired on alternate weeks with The Alcoa Hour. The three series were essentially the same, with the only real difference being the name of the sponsor. Producer Fred Coe nurtured and encouraged a group of young, mostly unknown writers that included Robert Alan Aurthur, George Baxt, Paddy Chayefsky, Horton Foote, Howard Richardson, Tad Mosel and Gore Vidal. Notable productions included Chayefskys Marty starring Rod Steiger, Chayefskys The Bachelor Party, Vidals Visit to a Small Planet, Richardsons Ark of Safety and Footes The Trip to Bountiful. From 1957 to 1960, it became a taped, half-hour series titled Goodyear Theater, seen on Mondays at 9:30pm.

Tales from the Darkside is an anthology horror TV series created by George A. Romero, each episode was an individual short story that ended with a plot twist. The series' episodes spanned the genres of horror, science fiction, and fantasy, and some episodes featured elements of black comedy or more lighthearted themes.
TV Show Star Rating : 7.07  Read More

Tales of the Unexpected is a British television series which aired between 1979 and 1988. Each episode told a story, often with sinister and wryly comedic undertones, with an unexpected twist ending. Early episodes were based on short stories by Roald Dahl collected in the books Tales of the Unexpected, Kiss Kiss and Someone Like You. The series was made by Anglia Television for ITV with interior scenes recorded at their Norwich studios whilst location filming mainly occurred across East Anglia. The theme music for the series was written by composer Ron Grainer.
TV Show Star Rating : 7.152  Read More

Cadaverous scream legend the Crypt Keeper is your macabre host for these forays of fright and fun based on the classic E.C. Comics tales from back in the day. So shamble up to the bar and pick your poison. Will it be an insane Santa on a personal slay ride? Honeymooners out to fulfill the "til death do we part" vow ASAP?
TV Show Star Rating : 7.957  Read More

A Japanese anthology series centered around a man who transforms into a bug-themed superhero.
TV Show Star Rating : 5.4  Read More

An anthology horror drama series centering on different characters and locations, including a house with a murderous past, an asylum, a witch coven, a freak show, a hotel, a farmhouse in Roanoke and a cult.
TV Show Star Rating : 8.097  Read More