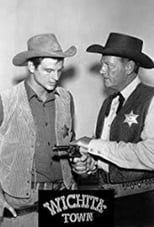 Wichita Town is a half-hour western television series starring Joel McCrea, Jody McCrea, Carlos Romero, and George Neise that aired on NBC from September 30, 1959, until April 6, 1960. Joel McCrea played Marshal Mike Dunbar, in charge of keeping the peace the booming cowtown of Wichita, Kansas. His deputies were Ben Matheson, played by McCreas real life son, Jody, and Rico Rodriquez, portrayed by Carlos Romero. Making occasional appearances were the town doctor, Nat Wyndham, the blacksmith, Aeneas MacLinahan, and the bartender in the local saloon, Joe Kingston, played in six episodes by Robert Foulk. The model for shows such as these had already been laid out by other western programs such as Gunsmoke, Lawman, and The Life and Legend of Wyatt Earp, so Wichita Town may not have been unique in its plotting and structure. The two most unusual features about the series were the presence of Joel McCrea, a favorite of Western movie audiences for his performance in such films as Union Pacific, Buffalo Bill, and Ramrod, and the fact that his real life son was in Wichita Town, but did not play his son. Wichita Town was produced by Mirisch Company and Joel McCreas Production company for Four Star Television and aired for a single season.

Jericho is an American action/drama series that centers on the residents of the fictional town of Jericho, Kansas, in the aftermath of nuclear attacks on 23 major cities in the contiguous United States.
TV Show Star Rating : 7.408  Read More

The High-Sierra adventures of Ben Cartwright and his sons as they run and defend their ranch while helping the surrounding community.
TV Show Star Rating : 7.581  Read More