Complete Savages is an American sitcom that was broadcast on ABC from September 2004 to June 2005. It was part of ABCs final TGIF comedy line-up. The show was created by Mike Scully and Julie Thacker and executive produced by Mel Gibson. It was cancelled after its first season due to low ratings. 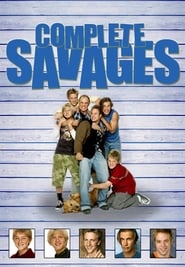 Blossom is an American sitcom broadcast on NBC from January 3, 1991, to May 22, 1995. The series was created by Don Reo, and starred Mayim Bialik as Blossom Russo, a teenager living with her father and two brothers. It was produced by Reo's Impact Zone Productions in association with Witt/Thomas Productions and Touchstone Television.
TV Show Star Rating : 5.8  Read More

James "Jimmy" Chance is a clueless 24-year-old who impregnates a serial killer during a one-night-stand. Earning custody of his daughter after the mother is sentenced to death, Jimmy relies on his oddball but well-intentioned family for support in raising the child.
TV Show Star Rating : 6.7  Read More

Hope, a down-to-earth, happily married mother of three has her tidy world turned upside down when her celebrity sister moves in. Faith was living the Hollywood life as a soap opera star before her character was killed off.
TV Show Star Rating : 5.1  Read More

Even Stevens is an American comedy television series that aired on Disney Channel with a total of three seasons and 65 episodes from June 17, 2000, to June 13, 2003. It follows the life of the Stevenses, a Jewish family living in suburban Sacramento, California, mainly focusing on the clashing personalities of its two younger siblings, Ren and Louis. The series was produced by Brookwell McNamara Entertainment and Fireworks Entertainment. It is often cited as launching Shia LaBeouf's breakout career as an actor. The show features a fast motion photography, which features in every episode. The feature-length Disney Channel Original Movie based on the series, The Even Stevens Movie, premiered on June 13, 2003, and serves as the series finale. As of January 15, 2010, in America, Even Stevens has been removed from television syndication altogether, though The Even Stevens Movie continues to air on Disney Channel and Disney XD, and on Family Channel occasionally. However, in the UK, Even Stevens continues to air on CITV and now Pop Girl. From its launch on June 1, 2011 to late 2012, the series were shown as re-runs on Disney XD in Canada & US.
TV Show Star Rating : 7.6  Read More