Smith is an American television drama that premiered on September 16, 2006 at 10:00 p.m. ET on CBS. Created by John Wells, the show follows a group of professional thieves who struggle to keep their work separate from the rest of their lives. The leader of the group Bobby Stevens seeks to end his criminal ways after a few more big scores. His plan is not successful and his wife Hope becomes suspicious. Bobby has a day job as a salesman for a paper cup manufacturer, which allows him to travel frequently. Each episode portrays a heist or preparation for other jobs the thieves plan to undertake. Ongoing subplots examine each of the characters double lives, a necessity in order to stay one step ahead of the authorities and shield their families. 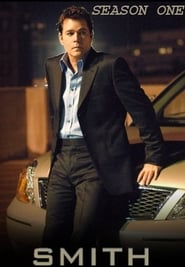 Nick Atwater, the leader of a robbery crew, is balancing his personal life with the planning of a major heist while being targeted by a relentless cop and the Chinese mafia.
TV Show Star Rating : 7.8  Read More

The Saint was an ITC mystery spy thriller television series that aired in the UK on ITV between 1962 and 1969. It centred on the Leslie Charteris literary character Simon Templar, played by Roger Moore as a suave and sophisticated Robin Hood-like adventurer. The character may be nicknamed The Saint because the initial letters of his name are also an abbreviation for the word saint. When taking on an American persona, he would often use the name Sebastian Tombs. As a result of the strong performance in the US of the first two black-and-white series in first-run syndication, NBC picked up the show as a summer replacement in its evening schedule in 1966. The programme therefore ended its run with both trans-Atlantic prime time scheduling and colour episodes. It also proved popular beyond the UK and US, eventually airing in over 60 countries, and made a profit in excess of £350m for ITC. With almost 120 episodes, the programme is exceeded only by The Avengers as the most productive show of its genre produced in the UK.
TV Show Star Rating : 7.2  Read More

A small group of military veterans sets out to rob a major bank in Pittsburgh. When things go awry, they're forced to take more than a dozen hostages from all walks of life, including a wealthy and powerful businessman's daughter.
TV Show Star Rating : 6.9  Read More

Leverage follows a five-person team: a thief, a grifter, a hacker, and a retrieval specialist, led by former insurance investigator Nathan Ford, who use their skills to fight corporate and governmental injustices inflicted on ordinary citizens.
TV Show Star Rating : 7.2  Read More