Heist is an American television series that premiered March 22, 2006, on NBC, but was almost immediately canceled due to low ratings. The series was from acclaimed director Doug Liman and revolved around professional thief Mickey O Neil, who created a team of experts to try to pull off the biggest heist in history — to simultaneously rob three jewelry stores on Rodeo Drive during Academy Awards week. Meanwhile, Amy Sykes, lead detective for LAPD’s Robbery Division, led the task force investigating a series of thefts committed by this new crew. Under high pressure from her superiors, she had to figure out not only who was behind the crimes, but also what larger job they were leading up to. 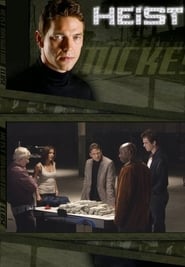 When Walter White, a New Mexico chemistry teacher, is diagnosed with Stage III cancer and given a prognosis of only two years left to live. He becomes filled with a sense of fearlessness and an unrelenting desire to secure his family's financial future at any cost as he enters the dangerous world of drugs and crime.
TV Show Star Rating : 8.71  Read More

An adrenalized drama with darkly comedic undertones that explores a notorious outlaw motorcycle club’s (MC) desire to protect its livelihood while ensuring that their simple, sheltered town of Charming, California remains exactly that, charming. The MC must confront threats from drug dealers, corporate developers, and overzealous law officers. Behind the MC’s familial lifestyle and legally thriving automotive shop is a ruthless and illegal arms business driven by the seduction of money, power, and blood.
TV Show Star Rating : 8.38  Read More

The story of an inner-city Los Angeles police precinct where some of the cops aren't above breaking the rules or working against their associates to both keep the streets safe and their self-interests intact.
TV Show Star Rating : 8.069  Read More

Set in the sprawling mecca of the rich and famous, Ray Donovan does the dirty work for LA's top power players, and makes their problems disappear. His father's unexpected release from prison sets off a chain of events that shakes the Donovan family to its core.
TV Show Star Rating : 7.501  Read More

In the year 2517, after the arrival of humans in a new star system, follow the adventures of the renegade crew of Serenity, a "Firefly-class" spaceship. The ensemble cast portrays the nine characters who live on Serenity.
TV Show Star Rating : 8.279  Read More

A family of crooks assume the identity of an upper-middle-class suburban clan in the Deep South.
TV Show Star Rating : 7.2  Read More

Simon Templar is The Saint, a handsome, sophisticated, debonair, modern-day Robin Hood who recovers ill-gotten wealth and redistributes it to those in need.
TV Show Star Rating : 7.289  Read More

After the unexpected death of her husband, a suburban mom resorts to selling weed to support her family.
TV Show Star Rating : 7.403  Read More

A five-person team comprised of a thief, a grifter, a hacker, and a retrieval specialist, led by former insurance investigator Nathan Ford, use their skills to fight corporate and governmental injustices inflicted on ordinary citizens.
TV Show Star Rating : 7.542  Read More