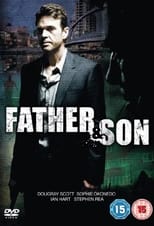 Father & Son is a four-part television crime thriller produced by Left Bank Pictures and Octagon Films for the British ITV network and the Irish broadcaster Raidió Teilifís Éireann. Written by Frank Deasy, the serial depicts the return of Michael OConnor to his native Ireland, after spending several years imprisoned in the United Kingdom. A parallel storyline follows OConnors son and sister-in-law in Manchester.

Witse is a Dutch language crime drama produced by Belgian broadcaster VRT and broadcast on their één channel. It is also shown on BVN. First broadcast in 2004, as of 2010 the programme comprises eight series with a ninth and final series planned for 2012. It stars Hubert Damen as the eponymous Witse, a driven inspector in the Belgian federal police based in Halle. It is one of the most popular Flemish television programmes with some 1.6 million viewers. There are also Witse books. The first three were based on the last two episodes of each season, but since 2010 every six months a brand new story is published, written and invented by established Belgian writers, as Bob Van Laerhoven and Bart Van Lierde. The music for Witse is composed by Steve Willaert.
TV Show Star Rating : 6.7  Read More

Grace, a morally and emotionally-conflicted undercover detective, is tormented by the possibility that her own actions contributed to her son’s death. Grace’s search for the truth is further complicated by her forbidden relationship with Jimmy, the crime boss who may have played a hand in the crime.
TV Show Star Rating : 7.266  Read More

Light Yagami is an ace student with great prospects—and he’s bored out of his mind. But all that changes when he finds the Death Note, a notebook dropped by a rogue Shinigami death god. Any human whose name is written in the notebook dies, and Light has vowed to use the power of the Death Note to rid the world of evil. But will Light succeed in his noble goal, or will the Death Note turn him into the very thing he fights against?
TV Show Star Rating : 8.653  Read More