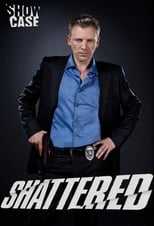 Shattered is a Canadian police procedural series. The main character is a tough, smart homicide detective in Vancouver who suffers from dissociative identity disorder, also known as multiple personality disorder. In the first moments of the series, Ben is bonded in blood to his determined friend. While they work to solve the murder cases that cross their desk daily, Ben copes with the fascinating complexities of his secret disorder, and the uncertainty of never knowing which alternate personality will surface, or when.

Cold Squad is a Canadian police procedural television series first broadcast in 1998 that followed the investigations of a part of the Vancouver Police Department Homicide Division tasked with solving cold cases, the titular Cold Squad, as led by Sergeant Ali McCormick. The cast of Cold Squad was diverse and changing, McCormick being the only character to appear in all 7 seasons. Some notable series regulars include Detective Tony Logozzo in seasons 1-2, Sgt. Frank Coscarella in seasons 3-4, Sgt. Len Harper in seasons 5-7, Insp. Vince Schneider season 1, Insp. Simon Ross season 2, Insp. Andrew Pawlachuk seasons 3-7, Det. Mickey Kollander seasons 3-6, Det. Nicco Sevallis seasons 3-6, Christine Wren seasons 4-7, as well as Det. Samantha Walters and Const. Ray Chase in season 7. Between the second and third seasons, almost the entire on-screen cast other than Julie Stewart were replaced. This along with the new sets, a significant revamp of the credits and theme music, and even having McCormick's hair change from auburn to dirty-blonde all contributed to a considerable reworking of the series.
TV Show Star Rating : 6  Read More

Detective John Cardinal attempts to uncover the mystery of what happened to the missing 13-year-old girl whose body is discovered in the shaft-head of an abandoned mine. At the same time, he comes under investigation by his new partner, Lise Delorme, a tough investigator in her own right.
TV Show Star Rating : 7  Read More

The series centers on the conflict between a group of rebels from the year 2077 who time-travel to Vancouver, BC, in 2012, and a police officer who accidentally accompanies them. In spite of being many years early, the rebel group decides to continue its violent campaign to stop corporations of the future from replacing governments, while the police officer endeavours to stop them without revealing to anyone that she and the rebels are from the future.
TV Show Star Rating : 7.5  Read More

Based on Michael Connelly's best-selling novels, these are the stories of relentless LAPD homicide Detective Harry Bosch who pursues justice at all costs. But behind his tireless momentum is a man who is haunted by his past and struggles to remain loyal to his personal code: “Everybody counts or nobody counts.”
TV Show Star Rating : 7.8  Read More

Hunter is an American police drama television series created by Frank Lupo, and starring Fred Dryer as Sgt. Rick Hunter and Stepfanie Kramer as Sgt. Dee Dee McCall, which ran on NBC from 1984 to 1991. However, Kramer left after the sixth season to pursue other acting and musical opportunities. In the seventh season, Hunter partnered with two different women officers. The titular character, Sgt. Rick Hunter, was a wily, physically imposing, and often rule-breaking homicide detective with the Los Angeles Police Department. The show's main characters, Hunter and McCall, resolve many of their cases by shooting dead the perpetrators. The show's executive producer during the first season was Stephen J. Cannell, whose company produced the series.
TV Show Star Rating : 7.1  Read More