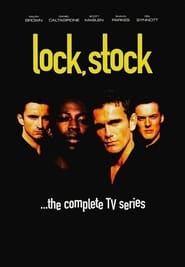 James “Ghost” St. Patrick has it all: a beautiful wife, a gorgeous Manhattan penthouse, and the hottest, up-and-coming new nightclub in New York. His club, Truth, caters to the elite: the famous and infamous boldface names that run the city that never sleeps. As its success grows, so do Ghost’s plans to build an empire. However, Truth hides an ugly reality. It’s a front for Ghost’s criminal underworld; a lucrative drug network, serving only the wealthy and powerful. As Ghost is seduced by the prospect of a legitimate life, everything precious to him becomes unknowingly threatened. Once you're in, can you ever get out?
TV Show Star Rating : 7.5  Read More

Set in 1959 Miami, Florida shortly after the Cuban Revolution, Magic City tells the story of Ike Evans, the owner of Miami's most glamorous hotel, the Miramar Playa. Evans is forced to make an ill-fated deal with Miami mob boss Ben Diamond to ensure the success of his glitzy establishment.
TV Show Star Rating : 6.6  Read More

Goodnight Sweetheart is a British sitcom that ran for six series on BBC1 from 1993 to 1999. It stars Nicholas Lyndhurst as Gary Sparrow, an accidental time traveller who leads a double life after discovering a time portal allowing him to travel between the London of the 1990s and the same area during the Second World War. The show was created by Laurence Marks and Maurice Gran, also creators of Birds of a Feather and The New Statesman. The creators wrote the first series, while subsequent episodes were by a team of writers. Although originally made for the BBC the series has subsequently been repeated on ITV3. Series 1-6 is now being broadcast on GOLD. For his starring role, Lyndhurst won the Most Popular Comedy Performer at the National Television Awards twice in 1998 and 1999.
TV Show Star Rating : 8.2  Read More

A working-class Irish family rules a city built on loyalty and corruption. The Caffee brothers, Tommy, a rising politician desperate for reelection, and Michael, a hardened criminal returning from seven years on the run and eager to reclaim his turf, fight for survival on opposite sides of the law. In their ruthless quest for power, the entire Caffee family is driven to lies, betrayal and infidelity - threatening to tear them and the city of Providence, RI apart.
TV Show Star Rating : 7.4  Read More