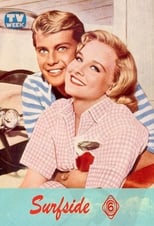 Surfside 6 was an ABC television series which aired from 1960 to 1962. The show centered on a Miami Beach detective agency set on a houseboat and featured Troy Donahue as Sandy Winfield II; Van Williams as Kenny Madison; and Lee Patterson as Dave Thorne. Diane McBain co-starred as socialite Daphne Dutton, whose yacht was berthed next to their houseboat. Margarita Sierra also had a supporting role as Cha Cha OBrien, an entertainer who worked at The Boom Boom Room, a popular Miami Beach hangout at the Fontainebleau Hotel, directly across the street from Surfside 6. Surfside 6 was in fact a real address in Miami Beach, where an unrelated houseboat was moored at the time; it can also be seen in the sweeping aerial establishing shot of the Fontainebleu in 1964s Goldfinger.

Vega$ is an American detective television drama series that aired on ABC between 1978 and 1981. It was produced by Aaron Spelling. The series was filmed in its entirety in Las Vegas, Nevada. It is believed to be the first television series produced entirely in Las Vegas. The show stars Robert Urich as private detective Dan Tanna, who drove around the streets of Las Vegas in a red 1957 Ford Thunderbird solving crimes and making Las Vegas a better place for residents and tourists alike.
TV Show Star Rating : 7.2  Read More

Ein Fall für zwei is a German television series, which premiered on September 11, 1981 on ZDF. The series, located in Frankfurt am Main, features two main characters who solve crimes: a defense attorney and a private investigator. Josef Matula, a former German police officer, has gone into private business. His method of investigation is very effective and direct, and he sometimes even resorts to dirty tricks. Claus Theo Gärtner has portrayed the role since the start of the series.
TV Show Star Rating : 5.9  Read More

Thanks to his police officer father's efforts, Shawn Spencer spent his childhood developing a keen eye for detail (and a lasting dislike of his dad). Years later, Shawn's frequent tips to the police lead to him being falsely accused of a crime he solved. Now, Shawn has no choice but to use his abilities to perpetuate his cover story: psychic crime-solving powers, all the while dragging his best friend, his dad, and the police along for the ride.
TV Show Star Rating : 7.808  Read More

Adrian Monk was once a rising star with the San Francisco Police Department, legendary for using unconventional means to solve the department's most baffling cases. But after the tragic (and still unsolved) murder of his wife Trudy, he developed an extreme case of obsessive-compulsive disorder. Now working as a private consultant, Monk continues to investigate cases in the most unconventional ways.
TV Show Star Rating : 7.86  Read More

Cranky but likable L.A. PI Jim Rockford pulls no punches (but takes plenty of them). An ex-con sent to the slammer for a crime he didn't commit, Rockford takes on cases others don't want, aided by his tough old man, his lawyer girlfriend and some shady associates from his past.
TV Show Star Rating : 7.7  Read More

Duckman: Private Dick/Family Man is an American animated sitcom that aired from 1994–1997, created by Everett Peck and developed by Peck. The sitcom is based on characters created by Peck in his Dark Horse comic. Klasky Csupo animated the series and produced it along with Reno & Osborn Productions for Paramount Network Television.
TV Show Star Rating : 7.902  Read More

Barnaby Jones is a television detective series starring Buddy Ebsen and Lee Meriwether as father- and daughter-in-law who run a private detective firm in Los Angeles. The show ran on CBS from January 28, 1973 to April 3, 1980, beginning as a midseason replacement. William Conrad guest starred as Frank Cannon of Cannon on the first episode of Barnaby Jones, "Requiem for a Son" and the two series had a two-part crossover episode in 1975, "The Deadly Conspiracy".
TV Show Star Rating : 7.8  Read More