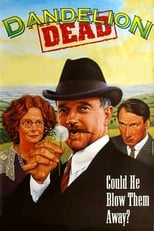 This is a dramatisation of the true story of Major Herbert Rowse Armstrong, a solicitor and magistrates clerk who lived in the small Welsh town of Hay-on-Wye. In 1921 he was arrested and charged with poisoning his domineering wife, Catherine, and later attempting to poison a business rival, Oswald Martin, by administering arsenic to them. At his trial, Armstrong claimed that he had bought the arsenic simply to kill the dandelions on his lawn. However he was convicted of murder and executed in 1922.

Akira Fudo learns from his best friend Ryo Asuka that demons will revive and reclaim the world from humans. With humans hopeless against this threat, Ryo suggests combining with a demon. With this, Akira becomes Devilman, a being with the power of demon but with a human heart.
TV Show Star Rating : 7.5  Read More

A ruthless outlaw terrorizes the West in search of a former member of his gang, who’s found a new life in a quiet town populated only by women.
TV Show Star Rating : 7.8  Read More

Drawn from interviews with survivors of Easy Company, as well as their journals and letters, Band of Brothers chronicles the experiences of these men from paratrooper training in Georgia through the end of the war. As an elite rifle company parachuting into Normandy early on D-Day morning, participants in the Battle of the Bulge, and witness to the horrors of war, the men of Easy knew extraordinary bravery and extraordinary fear - and became the stuff of legend. Based on Stephen E. Ambrose's acclaimed book of the same name.
TV Show Star Rating : 8.3  Read More

As Britain is rocked by unstable political, economic and technological advances, members of the Lyons family converge on one crucial night in 2019. Over the next 15 years, the twists and turns of their everyday lives are explored as we find out if this ordinary family could change the world.
TV Show Star Rating : 7.8  Read More

In this adaptation of Homer's timeless epic, Armand Assante stars as Odysseus, the warrior King of the mythical island of Ithaca, who must endure a decade long quest to reach home after the Trojan war, overcoming savage monsters, powerful forces of nature, and seductive nymphs, and he must outsmart them all, with all the guile and intellect he can muster. Directed by Andrei Konchalovsky, the miniseries aired in two-parts beginning on May 18, 1997 on NBC.
TV Show Star Rating : 7  Read More