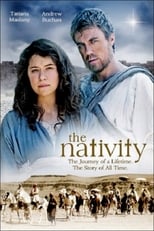 «The Nativity» is a 2010 British four-part drama television series. The series is a re-telling of the nativity and was broadcast on BBC One and BBC HD across four days, starting on 20 December 2010. It was rebroadcast in two hour-long parts on the mornings of 24 and 25 December 2011. The series stars Tatiana Maslany as Mary; Andrew Buchan as Joseph; Neil Dudgeon as Joachim; Claudie Blakley as Anna; Peter Capaldi as Balthasar and John Lynch as Gabriel.