Charlies Angels is a remake developed by Alfred Gough and Miles Millar for ABC, based upon the 1976 series of the same name created by Ivan Goff and Ben Roberts. The series ran on ABC from September 22 to November 10, 2011. A remake of the original show had been in the works since 2009. Although there were going to be 13 episodes to be aired, production of Charlies Angels ended on October 14, 2011 after airing only four episodes due to extremely poor ratings and critical reviews. It burned off three of the remaining four episodes and concluded its run on ABC on November 10, 2011. The shows critically negative reviews focused on its acting, plot, and action scenes. Charlies Angels is currently available on DVD from Sony Pictures Home Entertainment. 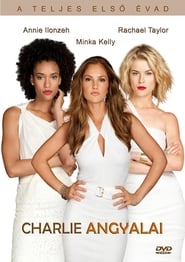 Magnum, P.I. is an American television series starring Tom Selleck as Thomas Magnum, a private investigator living on Oahu, Hawaii. The series ran from 1980 to 1988 in first-run broadcast on the American CBS television network. According to the Nielsen ratings, Magnum, P.I. consistently ranked in the top twenty U.S. television programs during the first five years that the series was originally broadcast in the United States. Originally appearing in a prime time American network timeslot of 8 p.m. Eastern on Thursdays, Magnum, P.I. was one of the highest-rated shows on U.S. television.
TV Show Star Rating : 7  Read More

Nikita will stop at nothing to expose and destroy Division, the secret U.S. agency who trained her as a spy and assassin.
TV Show Star Rating : 7  Read More

Super soldier Max Guevera tries to live a normal life in post-apocalyptic Seattle while eluding capture by government agents from the covert biotech facility she escaped from as a child and searching for her genetically-enhanced brothers and sisters who have dispersed after escape.
TV Show Star Rating : 7.2  Read More