Get Some In! is a British comedy series set in the 1950s that focused on the Royal Air Force National Service. The show was broadcast between 1975 and 1978 by Thames Television. Scripts were by John Esmonde and Bob Larbey, the team behind the BBC TV sitcom The Good Life. The programme drew its inspiration from late 1950s/early 1960s National Service situation-comedy The Army Game, and from nostalgic BBC TV sitcom Dads Army, but the RAF setting gave it enough originality not to seem formulaic. Thirty-four half-hour episodes were made. The series has never been repeated in full on terrestrial TV, although the UKTV Gold cable channel has aired the episodes uncut. 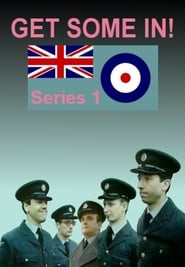 Similar TV Shows to Get Some In!

Hi-de-Hi! is a British sitcom set in Maplins, a fictional holiday camp, during 1959 and 1960, and was written by Jimmy Perry and David Croft, who also wrote Dad's Army and It Ain't Half Hot Mum amongst others. It aired on the BBC from 1980 to 1988. The title was the phrase used to greet the campers and in early episodes was written Hi de Hi. The series revolved around the lives of the camp's management and entertainers, most of them struggling actors or has-beens. The inspiration was the experience of writers Perry and Croft: after being demobilised from the Army, Perry was a Redcoat at Butlins, Pwllheli during the holiday season. The series gained large audiences and won a BAFTA as Best Comedy Series in 1984. In 2004, it came 40th in Britain's Best Sitcom and in a 2008 poll on Channel 4, Hi-de-Hi! was voted the 35th most popular comedy catchphrase.
TV Show Star Rating : 7.2  Read More

Comedy about the life and times of William Shakespeare as he starts to make a name for himself in London, whilst also trying to balance life as a husband and father for his family in Stratford-upon-Avon.
TV Show Star Rating : 7.8  Read More

Laverne & Shirley is an American television sitcom that ran on ABC from January 27, 1976 to May 10, 1983. It starred Penny Marshall as Laverne De Fazio and Cindy Williams as Shirley Feeney, single roommates who worked as bottlecappers in a fictitious Milwaukee brewery called "Shotz Brewery." The show was a spin-off from Happy Days, as the two lead characters were originally introduced on that series as acquaintances of Fonzie. Set in roughly the same time period, the timeline started in approximately 1958, when the series began, through 1967, when the series ended. As with Happy Days, it was made by Paramount Television, created by Garry Marshall, and executive produced by Garry Marshall, Edward K. Milkis, and Thomas L. Miller.
TV Show Star Rating : 7.6  Read More

It Aint Half Hot Mum

The comic adventures of a group of misfits who form an extremely bad concert party touring the hot and steamy jungles of Burma entertaining the troops during World War II.
TV Show Star Rating : 7.9  Read More

The Wayans Bros. is a situation comedy that aired from January 1995 to May 1999 on The WB. The series starred real-life brothers Shawn and Marlon Wayans. Both brothers were already well-known from the sketch comedy show In Living Color that was aired from 1990 to 1994 on Fox. The series also starred John Witherspoon and Anna Maria Horsford.
TV Show Star Rating : 7.8  Read More