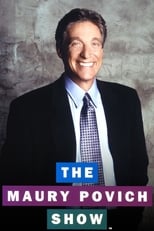 Maury is a syndicated American tabloid talk show hosted by Maury Povich. When the series first aired in 1991, the show was called The Maury Povich Show and was produced by MoPo Productions in association with Paramount Domestic Television. The show adopted the title Maury in the 1995–1996 season. The show was then revamped in the 1998–1999 season, when Studios USA took over production. However, MoPo continues to co-produce with NBCUniversal. For the series first 18 seasons, it was taped in New York City, but beginning with Season 19, the show has been taped in the Stamford Media Center in Stamford, Connecticut. Maury is one of four NBC Universal syndicated properties to make the move to Connecticut, joining the former Chicago-based Jerry Springer and Steve Wilkos shows. The fourth, the syndicated Deal or No Deal, is no longer in production. The Trisha Goddard Show became the fourth show in production with NBC Universal. The TV rating on Maury is rated TV-PG and TV-14 on the syndicated stations of the United States, based on each episodes content. On September 17, 2012, during the premiere of its 22nd season, episodes of Maury began airing in widescreen. However, like its sister shows, it is still broadcasting 480i standard definition. On March 26, 2013, Maury was renewed for an additional three years until 2016.

Celebrity guests are split into two teams to compete in various contests. One guest, known only to himself, is designated the "X-Man", and does his best to cause his team to lose the contests. At the end, all guests try to determine the X-Man's identity.
TV Show Star Rating : 5.7  Read More

El Hormiguero is a Spanish television program with a live audience focusing on comedy, science, and politics running since September 2006. It is hosted and produced by screenwriter Pablo Motos. The show aired on Spain's Cuatro channel from launch until June 2011 and is now broadcast on Antena 3. Recurring guests on the show include Luis Piedrahita, Raquel Martos, Marron & "The Man in Black", and puppet ants Trancas and Barrancas. It has proved a ratings success, and has expanded from a weekly 120-minute show to a daily 40-minute show in its third season, which began on September 17, 2007. The show won the Entertainment prize at the 2009 Rose d'Or ceremony.
TV Show Star Rating : 6.2  Read More

Each week celebrity guests join Irish comedian Graham Norton to discuss what's being going on around the world that week. The guests poke fun and share their opinions on the main news stories. Graham is often joined by a band or artist to play the show out.
TV Show Star Rating : 7.173  Read More

The Tonight Show with Jay Leno is an American late-night talk show hosted by Jay Leno that initially aired from May 25, 1992 to May 29, 2009, and resumed production on March 1, 2010. The fourth incarnation of the Tonight Show franchise made its debut on May 25, 1992, three days following Johnny Carson's retirement as host of the program. The program originates from NBC Studios in Burbank, California, and is broadcast Monday through Friday at 11:35 PM in the Eastern and Pacific time zones. Unlike Carson or his predecessor Jack Paar, Leno only once utilized a guest host, preferring to host the series by himself. On April 26, 1999, the show began broadcasting in 1080i HDTV, becoming the first American nightly talk show to be shot in high definition. The show is shot in 16:9 aspect ratio. The series, which followed the same basic format as that of his predecessors, ran until May 29, 2009, after which Leno was succeeded by Conan O'Brien. NBC signed Leno to a new deal for a nightly talk show in the 10:00 pm ET timeslot. The primetime series, titled The Jay Leno Show, debuted on September 14, 2009, following a similar format to the Leno incarnation of Tonight.
TV Show Star Rating : 5.382  Read More