Sirens is a British comedy-drama about an ambulance service team broadcast on Channel 4. It was first screened on 27 June 2011. The series is based on the book Blood, Sweat & Tea by Brian Kellett. The series is filmed predominantly in Leeds with some filmed in the surrounding areas. Locations featured including Headingley, Kirkstall, Adel, Hyde Park, Cookridge, Chapel Allerton and the main city centre including shopping areas of Briggate and Headrow. On 17 October 2011, Rhys Thomas and Channel 4 confirmed that there would not be a second series. 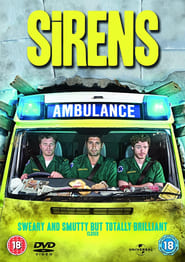 A comedy that follows three Chicago EMTs who despite their narcissistic and self-destructive personalities are uniquely qualified to save lives.
TV Show Star Rating : 7.3  Read More

The Thick of It

Set in the corridors of power and spin, the Minister for Social Affairs is continually harassed by Number 10's policy enforcer and dependent on his not-so-reliable team of civil servants.
TV Show Star Rating : 8  Read More

Green Wing is a British sitcom set in the fictional East Hampton Hospital. It was created by the same team behind the sketch show Smack the Pony, led by Victoria Pile, and stars Tamsin Greig, Stephen Mangan and Julian Rhind-Tutt. Although set in a hospital, it uses no medical storylines; the action is produced by a series of soap opera-style twists and turns in the personal lives of the characters. They proceed through a series of often absurd sketch-like scenes, or by sequences where the film is slowed down or sped up, often emphasizing the body language of the characters. The show has eight writers. Two series were made by the Talkback Thames production company for Channel 4. The series ran between 3 September 2004 and 19 May 2006. A special episode was filmed with the second series, which was shown as a 90 minute long special on 4 January 2007 in the UK, but was shown in Australia and Belgium on 29 December 2006. Separate from the series, a special sketch was made for Comic Relief and screened on 11 March 2005. Another was performed live at The Secret Policeman's Ball on 14 October 2006.
TV Show Star Rating : 8  Read More

The story of a double-glazing showroom in Essex in the 80s, led by charismatic Vincent Swan, and his unscrupulous sales team, Brian Fitzpatrick and Martin Lavender.
TV Show Star Rating : 6.8  Read More

Derek is a loyal nursing home caretaker who sees only the good in his quirky co-workers as they struggle against prejudice and shrinking budgets to care for their elderly residents.
TV Show Star Rating : 7.1  Read More