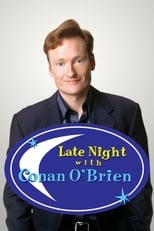 Late Night with Conan OBrien is an American late-night talk show hosted by Conan OBrien that aired 2,725 episodes on NBC between 1993 and 2009. The show featured varied comedic material, celebrity interviews, and musical and comedy performances. Late Night aired weeknights at 12:37 am Eastern/11:37 pm Central and 12:37 am Mountain in the United States. From 1993 until 2000, Andy Richter served as OBriens sidekick; following his departure, OBrien was the shows sole featured performer. The shows house musical act was The Max Weinberg 7, led by E Street Band drummer Max Weinberg. The second incarnation of NBCs Late Night franchise, OBriens debuted in 1993 after David Letterman, who hosted the first incarnation of Late Night, moved to CBS to host Late Show opposite The Tonight Show. In 2004, as part of a deal to secure a new contract, NBC announced that OBrien would leave Late Night in 2009 to succeed Jay Leno as the host of The Tonight Show. Jimmy Fallon began hosting his version of Late Night on March 2, 2009. 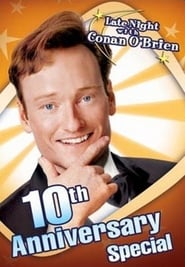 Late Night with David Letterman is a nightly hour-long comedy talk show on NBC that was created and hosted by David Letterman. It premiered in 1982 as the first incarnation of the Late Night franchise and went off the air in 1993, after Letterman left NBC and moved to Late Show on CBS. Late Night with Conan O'Brien then filled the time slot. As of March 2, 2009, the slot has been filled by Late Night with Jimmy Fallon. It will be filled by Seth Meyers in the spring of 2014, after Fallon becomes host of The Tonight Show.
TV Show Star Rating : 6.2  Read More

The Tonight Show with Jay Leno is an American late-night talk show hosted by Jay Leno that initially aired from May 25, 1992 to May 29, 2009, and resumed production on March 1, 2010. The fourth incarnation of the Tonight Show franchise made its debut on May 25, 1992, three days following Johnny Carson's retirement as host of the program. The program originates from NBC Studios in Burbank, California, and is broadcast Monday through Friday at 11:35 PM in the Eastern and Pacific time zones. Unlike Carson or his predecessor Jack Paar, Leno only once utilized a guest host, preferring to host the series by himself. On April 26, 1999, the show began broadcasting in 1080i HDTV, becoming the first American nightly talk show to be shot in high definition. The show is shot in 16:9 aspect ratio. The series, which followed the same basic format as that of his predecessors, ran until May 29, 2009, after which Leno was succeeded by Conan O'Brien. NBC signed Leno to a new deal for a nightly talk show in the 10:00 pm ET timeslot. The primetime series, titled The Jay Leno Show, debuted on September 14, 2009, following a similar format to the Leno incarnation of Tonight.
TV Show Star Rating : 5.3  Read More

Late Night with Jimmy Fallon is an American late-night talk show airing weeknights at 12:35 am Eastern/11:35 pm Central on NBC in the United States. The hour-long show premiered on March 2, 2009, and is hosted by actor, comedian and performer Jimmy Fallon, an alumnus of Saturday Night Live. Hip hop/neo soul band The Roots serve as the show's house band, and Steve Higgins is the show's announcer. The third incarnation of the Late Night franchise originated by David Letterman, the program originates from NBC Studio 6B in the GE Building at 30 Rockefeller Center in New York City. The show typically opens with a brief monologue from Fallon, followed by a comedy "desk piece," as well as prerecorded segments and audience competitions. The next segment is devoted to a celebrity interview, with guests ranging from actors and musicians to media personalities and political figures. The show then closes with either a musical or comedy performance. The show frequently employs digital media into its comedy, which has become crucial to its success. Fallon has been appointed to become the next host of The Tonight Show, where he will succeed the current host Jay Leno at the conclusion of the 2014 Winter Olympics, with fellow SNL alum Seth Meyers slated to replace Fallon.
TV Show Star Rating : 6.4  Read More

V Graham Norton was an entertainment programme shown on Channel 4 in the United Kingdom starring Graham Norton, broadcast every weeknight as a successor to the weekly So Graham Norton. It aired from 6 May 2002 to 26 December 2003. It featured celebrities who chatted with Graham and became involved in studio games which were usually laden with sexual innuendo. The studio games were later featured on the clip show Nortonland in 2007 on digital channel Challenge. The show featured a 'webcam', a roving television camera which was randomly situated in a different place in the UK each week and which followed Graham's instructions and allowed him to interact with the public live. The feature was made technically possible using digital microwave link technology provided by Rear Window Television with the 'spontaneous' webcam feature always produced as a full quality Outside Broadcast, before being made to look like a traditional webcam at the studios. The most often repeated moment involved Graham and Dustin Hoffman interacting live with a passenger of a London taxi cab driving through the city. V Graham Norton is available on 4oD through Virgin Media, but not through the PC.
TV Show Star Rating : 6  Read More

Late Show with David Letterman is an American late-night talk show hosted by David Letterman on CBS. The show debuted on August 30, 1993, and is produced by Letterman's production company, Worldwide Pants Incorporated and CBS Television Studios. The show's music director and band-leader of the house band, the CBS Orchestra, is Paul Shaffer. The head writer is Matt Roberts and the announcer is Alan Kalter. Of the major U.S. late-night programs, Late Show ranks second in cumulative average viewers over time and third in number of episodes over time. The show leads other late night shows in ad revenue with $271 million in 2009. In most U.S. markets the show airs at 11:35 p.m. Eastern/Pacific time, but is recorded Monday through Wednesday at 4:30 p.m., and Thursdays at 3:30 p.m and 6:00 p.m. The second Thursday episode usually airs on Friday of that week. In 2002, Late Show with David Letterman was ranked No. 7 on TV Guide's 50 Greatest TV Shows of All Time. CBS has a contract with Worldwide Pants to continue the show through 2014; by then, Letterman will surpass Johnny Carson as the longest tenured late-night talk show host.
TV Show Star Rating : 6.6  Read More

After Jay Leno's second retirement from the program, Jimmy Fallon stepped in as his permanent replacement. After 42 years in Los Angeles the program was brought back to New York.
TV Show Star Rating : 6.3  Read More