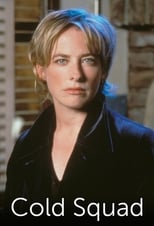 Cold Squad is a Canadian police procedural television series first broadcast in 1998 that followed the investigations of a part of the Vancouver Police Department Homicide Division tasked with solving cold cases, the titular Cold Squad, as led by Sergeant Ali McCormick. The cast of Cold Squad was diverse and changing, McCormick being the only character to appear in all 7 seasons. Some notable series regulars include Detective Tony Logozzo in seasons 1-2, Sgt. Frank Coscarella in seasons 3-4, Sgt. Len Harper in seasons 5-7, Insp. Vince Schneider season 1, Insp. Simon Ross season 2, Insp. Andrew Pawlachuk seasons 3-7, Det. Mickey Kollander seasons 3-6, Det. Nicco Sevallis seasons 3-6, Christine Wren seasons 4-7, as well as Det. Samantha Walters and Const. Ray Chase in season 7. Between the second and third seasons, almost the entire on-screen cast other than Julie Stewart were replaced. This along with the new sets, a significant revamp of the credits and theme music, and even having McCormicks hair change from auburn to dirty-blonde all contributed to a considerable reworking of the series.

British crime drama based on the "Dalziel and Pascoe" series of books by Reginald Hill, set in the fictional Yorkshire town of Wetherton. The unlikely duo of politically incorrect elephant-in-a-china-shop-copper Detective Superintendent Andrew Dalziel (pronounced Dee-ell) and his more sensitive and university educated sidekick Detective Sargent, later Detective Inspector, Peter Pascoe is always on hand to solve the classic murder mystery, while maintaining a down to earth wit and humour.
TV Show Star Rating : 7.125  Read More

The F.B.I. is an American television series that was broadcast on ABC from 1965 to 1974. It was sponsored by the Ford Motor Company, and the characters almost always drove Ford vehicles in the series. Alcoa was co-sponsor of Season One only.
TV Show Star Rating : 4.8  Read More

The third installment of the “Law & Order” franchise takes viewers deep into the minds of its criminals while following the intense psychological approaches the Major Case Squad uses to solve its crimes.
TV Show Star Rating : 7.606  Read More

The absurd adventures of two defective detectives, who - despite unbelievable incompetence - somehow manage to solve their cases (or be nearby when the cases are solved) and retain their jobs.
TV Show Star Rating : 7.4  Read More

A pie-maker, with the power to bring dead people back to life, solves murder mysteries with his alive-again childhood sweetheart, a cynical private investigator, and a lovesick waitress.
TV Show Star Rating : 7.96  Read More

The Ruth Rendell mysteries is a British television series made by TVS and Meridian Television for ITV between 2 August 1987 and 11 October 2000.
TV Show Star Rating : 8  Read More