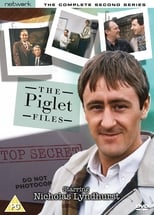 The Piglet files is a British sitcom produced by LWT. The show consisted of three series totalling 21 episodes that ran between 7 September 1990 and 10 May 1992. The programme follows the life of reluctant MI5 agent Peter “Piglet” Chapman as he tries to instruct his fellow agents on the finer points of spy gadgetry while keeping his wife Sarah in the dark about his new career.

Life’s good for deliveryman Doug Heffernan, until his newly widowed father-in-law, Arthur, moves in with him and his wife Carrie. Doug is no longer the king of his domain, and instead of having a big screen television in his recently renovated basement, he now has a crazy old man.
TV Show Star Rating : 7.057  Read More

Al Bundy is an unsuccessful middle aged shoe salesman with a miserable life and an equally dysfunctional family. He hates his job, his wife is lazy, his son is dysfunctional (especially with women), and his daughter is dim-witted and promiscuous.
TV Show Star Rating : 7.592  Read More

Will Truman and Grace Adler are best friends living in New York, and when Grace's engagement falls apart, she moves in with Will. Together, along with their friends, they go through the trials of dating, sex, relationships and their careers, butting heads at times but ultimately supporting one another while exchanging plenty of witty banter along the way.
TV Show Star Rating : 6.991  Read More

Get Smart is an American comedy television series that satirizes the secret agent genre. Created by Mel Brooks with Buck Henry, the show stars Don Adams, Barbara Feldon, and Edward Platt. Henry said they created the show by request of Daniel Melnick, who was a partner, along with Leonard Stern and David Susskind, of the show's production company, Talent Associates, to capitalize on "the two biggest things in the entertainment world today"—James Bond and Inspector Clouseau. Brooks said: "It's an insane combination of James Bond and Mel Brooks comedy." This is the only Mel Brooks production to feature a laugh track. The success of the show eventually spawned the follow-up films The Nude Bomb and Get Smart, Again!, as well as a 1995 revival series and a 2008 film remake. In 2010, TV Guide ranked Get Smart's opening title sequence at No. 2 on its list of TV's Top 10 Credits Sequences, as selected by readers.
TV Show Star Rating : 8.035  Read More

Becker is a dedicated, outspoken and talented doctor with a gruff exterior. While he tends to offend those who try to get close to him, he is extremely dedicated to his medical practice in the Bronx, N.Y., where he always goes the extra mile to help those in need. But Dr. John Becker looks at the world around him and sees a society gone mad, full of incongruities and just plain wrong thinking. And he has no qualms about saying anything that comes to mind – anything.
TV Show Star Rating : 7.221  Read More

Samantha Stephens is a seemingly normal suburban housewife who also happens to be a genuine witch, with all the requisite magical powers. Her husband Darrin insists that Samantha keep her witchcraft under wraps, but situations invariably require her to indulge her powers while keeping her bothersome mother Endora at bay.
TV Show Star Rating : 7.948  Read More

Wong Ka-Nam disappeared to the United States, leaving behind her son and husband in Hong Kong. When her husband dies in an airplane accident looking for her, Wong Ka-Nam's son, Luk Chit is taken into the custody of her mother-in-law, Ng Hang. After eighteen long years, Wong Ka-Nam wishes to see her son again and returns to Hong Kong. However, she is met with adamant resistance from her mother-in-law, who views Ka-Nam as bad luck, blaming her for the death of her son. Highly protective of her grandson and fearing that Wong Ka-Nam will attempt to take him away, Ka Nam's mother-in-law does everything in her power to keep mother and son apart. However, Wong Ka-Nam is ironically assisted by her own son, who befriends her and secures her office job in his advertising agency.
TV Show Star Rating : 0  Read More